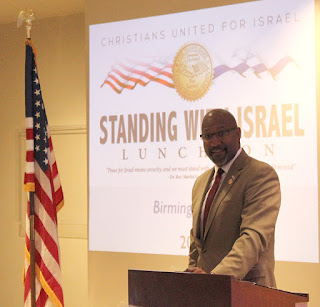 Dexter Avenue King Memorial Baptist Church in Montgomery will be the site of “a historic moment” on May 30, as a Standing With Israel event will be held in the sanctuary where Dr. Martin Luther King Jr. preached.

Holocaust survivor Irving Roth will be the keynote speaker at Montgomery’s first community-wide event of this type.

The program, coordinated by Christians United for Israel, is open to the community. Pastor Lyndon Allen, CUFI’s Central Region Coordinator, spoke of the historical significance of the 7 p.m. program, with “a Holocaust survivor speaking from the same space that Dr. King preached.” Allen will emcee the evening.

At a pastor’s luncheon on May 23 at Birmingham’s Temple Emanu-El, Allen spoke of the close ties between the Jewish and African-American communities during the civil rights era. “To tell the story of civil right history in America without mentioning the Jewish community is a travesty,” he said.

“Dr. King was an ardent Christian Zionist. It is fitting that congregants of this historic church will hear from a Holocaust survivor about the importance of standing with Israel and the Jewish community — the same community who stood with Dr. King just a few decades ago,” Allen said.

Roth was 16 years old when he was liberated from Buchenwald on April 10, 1945, by two U.S. soldiers — U.S. Army Corporal Rick Carrier and an African-American soldier whose name he never knew, but who had entered his barracks bearing chocolate.

Carrier had been looking for a supply dump but instead stumbled on the camp.

Roth, a native of Czechoslovakia, admits in interviews that he had never seen a black person before. “I tell people you may not know what the Messiah looks like, but I do. One is black and one is white.”

Roth and his brother were captured toward the end of the war, having been hiding in Hungary. They were sent to Auschwitz, then marched to Buchenwald when the Russians were closing in on Auschwitz. That was the last time he saw his brother.

After the war, Roth moved to New York and served in the U.S. Army in Korea.

Roth travels the country sharing his story, and since 2008 has spoken at numerous CUFI events because he supports their goal of advocating for Israel. He met Randy Neal, western regional coordinator for CUFI and became friends, starting his CUFI involvement.

With more than 3.3 million members, CUFI is the largest pro-Israel organization in the United States and one of the leading Christian grassroots movements in the world. Each year CUFI holds hundreds of pro-Israel events in cities around the country.

Doors will open at 6:30 p.m. The event is free, but registration is required here.