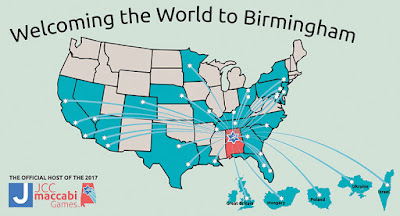 In just under two months, 850 Jewish teens from around the country and across the world will converge on Birmingham for the Jewish Community Centers Maccabi Games, and the organizing committee is working hard to make sure the community is ready to greet them.

The JCC Maccabi Games is part of the Jewish Community Centers Association, and three communities across North America host the games each summer. Thousands of Jewish teens from ages 13 to 16 participate each year in an Olympic-style sporting event. It is regarded as the second-largest organized sports program for Jewish teens in the world, and Birmingham is the second-smallest Jewish community to host the games since they were founded in Memphis in 1982.

The Birmingham Maccabi Games will be held July 30 to Aug. 4.

Bruce Sokol, who is volunteer co-chair of the Birmingham games with Layne Held, said the biggest challenges are housing and recruiting volunteers. “We feel we will get there,” he said.

Levite Jewish Community Center Executive Director Betzy Lynch said they currently have about 250 homes signed up. A Maccabi Games requirement is that all visiting athletes receive home hospitality in a Jewish household, and roughly 300 houses are needed.

Lynch said all that is needed is a place to sleep and get breakfast. There will be two drop-off points, one over the mountain and one closer to the LJCC, where the athletes will be shuttled through the Maccabi Games transportation system. After the athletes are dropped off in the morning, host families don’t have any responsibility until the evening.

For the games, there are 1200 volunteer slots available. Volunteers have to be at least 17 years old for daytime events, 21 for evening events. One need not be Jewish to volunteer, and one can sign up for multiple slots.

Sport volunteers are needed for scoring and other tasks for baseball, basketball, flag football, soccer, swimming, tennis, volleyball and dance.

A typical Maccabi Games budget is around $1 million in cash and in-kind donations, with the host community having to come up with about two-thirds of that amount.

Sokol said that with the LJCC in need of major updating and a capital campaign likely in the near future, they decided not to approach the Jewish community for the games, only to turn around and solicit for a campaign afterward. Instead, the emphasis was pitching the games to the corporate community as a boost to the city overall.

Held said over 70 companies around Birmingham and in nearby communities have stepped up, and they foresee total fundraising of about $700,000.

Sokol noted that having the games in Birmingham will have an impact of several million dollars to the local economy.

It is likely, Held said, that 90 percent of those attending the games “would not have a reason to ever come to Birmingham. We’re giving them a reason.”

The city of Birmingham is a title sponsor, and major grants came from the Mayer Electric Foundation and the Birmingham Jewish Foundation.

In turn, Sokol said, the Maccabi Games could be a platform to launch enthusiasm for a campaign to update the building.

Because the fundraising was aimed at the corporate community, “we’re asking the Jewish community for time and commitment,” Held said.

The LJCC staff “has given so much effort to this in addition to their regular jobs,” he noted.

There will be 29 delegations, including nearby communities such as New Orleans, Memphis, Atlanta and Charlotte. Other teams are coming from as far as New York, Minnesota and California.

Along with the opening ceremony speakers, renowned Cantor Alberto Mizrahi will sing, joined by Temple Emanu-El Cantor Jessica Roskin. Mizrahi will also be at the July 28 Shabbat service at Emanu-El.

The 10-foot cauldron for the torch lighting is being forged at Sloss Furnace, and after the games will be displayed at the LJCC.

Lynch said that is part of an effort to put a Birmingham stamp on every aspect of the games. For example, all of the chips will be Golden Flake, the cookies will be from Bud’s Best.

The Day of Service will provide an opportunity to explore Birmingham’s civil rights history. The athletes will be divided into three groups and rotate among the Civil Rights Institute, Kelly Ingram Park and the 16th Street Baptist Church.

That day’s hands-on project will be assembling school supplies that all of the delegations are bringing. A similar drive is now underway at the LJCC, and the supplies will be donated to Birmingham schools, so teachers can distribute them to students that start the year unable to bring their own supplies.

The Block Party one evening will involve the McWane Center and the new food hall at the Pizitz building.

Venues include Birmingham-Southern College, the CrossPlex, Altamont School and UAB. The LJCC will be the hub for lunch, Maccabi Central and Hangtime.

“We’re showcasing the great things about our city,” Held said.

The closing ceremony on Aug. 3 will be at the LJCC field, with entertainment and the passing of the torch to the 2018 venue. Red Mountain Entertainment, which organizes concerts and festivals in the region, is coordinating entertainment for the evenings.

While Sokol said they want everyone to participate in this “big party,” everyone attending any event has to be credentialed, due to longstanding security policies for Maccabi Games.

Another goal was to have a large host delegation. Held said Birmingham has never sent more than 15 athletes to a Maccabi Games. This year, the home team will have about 75 athletes from across Alabama, along with teens from Birmingham sister cities, Rosh Ha’Ayin, Israel, and Vinnitsa, Ukraine.

Held said “this is an event for the entire Jewish community to showcase our community, our people and the city.”

In addition to the athletes, there will be about 2,500 relatives, friends and coaches visiting “who want to see what our Jewish community is like,” Held said.

Sokol said hosting the Games “is the most important thing to happen to the Birmingham Jewish community in my lifetime.”

Held said “it does not matter if you are member of the JCC, or what Temple you belong to… everyone gets to come together as Jews to put this set of games on.”

LJCC President Allison Weil said “It’s now up to us, the Birmingham Jewish community, to open our homes to the athletes and give of our time during the games to make them successful. Don’t wait for someone to call and ask you to host or volunteer. Come to the J or call us, and we will get you on board.”

Sokol added “We want this to be the best Maccabi Games ever.”

More information on the Maccabi Games, housing and volunteering can be found here.