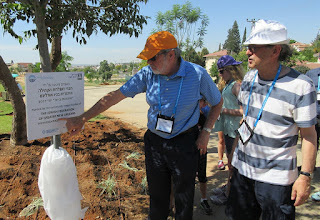 The transition has begun at the Jewish Federation of Greater New Orleans.

In a statement today, Federation President Eddie Soll and incoming President Henry Miller announced that Executive Director Michael Weil “is now on a leave of absence.” Sherri Tarr, who has been assistant executive director, became the acting executive director.

On May 17, the Federation announced the hiring of Arnie Fielkow as the new chief executive officer of the Federation. Today’s statement said Fielkow will start on Aug. 15, as previously announced. Tarr will be acting executive director until then.

In December 2015, Weil had announced his retirement and return to Israel, effective at the end of the current Federation executive term in September 2017.

The announcement comes just after participants in a 79-person New Orleans mega-mission to Israel, coordinated by the Federation, returned to the city.

Weil arrived in New Orleans in October 2006, one year after the levees broke and flooded the city. An economist by training, most of Weil’s career centered around strategic development, renewal and urban planning.

Before taking the New Orleans position, he had been a policy research fellow at the Jewish People Policy Planning Institute, which was chaired by former U.S. Undersecretary of State Dennis Ross.

In late 2006, the New Orleans Jewish community, which had numbered 9500 and was slowly falling before Hurricane Katrina, bottomed out at about 6,500 returnees. At the time, the question was whether to downsize the infrastructure that had served a community of 10,000, or try to rebuild the community’s numbers.

With national organizations assisting, the doors remained open at all of the community’s institutions, and today the community numbers over 11,000.