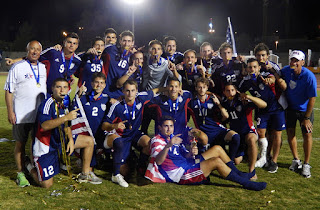 The 2013 team celebrates the first-ever gold medal for the U.S. in soccer at the World Maccabiah Games in Israel.

In the sports world, there is nothing like going out on top, and after leading the U.S. men’s open soccer team to its first-ever gold medal at the World Maccabiah Games in 2013, that’s what Coach Preston Goldfarb intended to do. “It’s hard to go back when you’ve reached the mountaintop,” he said.

Instead, the recently-retired legendary head coach of Birmingham-Southern College is now preparing for another trip to Israel as head coach, with a repeat in mind.

Goldfarb said the 2013 team “became the ‘Impossible Dream’ Team by winning the first ever gold medal by an Open Men’s Soccer team for the U.S. We believe our 2017 team will continue that ‘Impossible Dream’ by becoming the ‘Forever Team’ and make history again by going ‘Back-to-Back for Gold Medals’.”

Goldfarb was head coach for the open men’s soccer team at the Maccabi Australia International Games in 2010 and for the junior boys’ soccer team at the 2009 Maccabiah. The 2009 team lost the bronze medal game to Brazil, 1-0, but was the only U.S. soccer team to play for a medal. After the fourth-place finish in 2009, the 2010 team took silver in Australia.

In 2016, Goldfarb was named chair of U.S. soccer for the Maccabi Pan Am Games in Chile, and co-chair for the 2017 World Games.

Goldfarb said it turned out to be a positive development for him. Having just finished his Birmingham-Southern career, this gave him something to ease his transition into retirement.

Repeating the 2013 feat will be “more difficult” this year, partly because there is a “bad schedule” for every team, and the U.S. is in a challenging preliminary group with Great Britain, Venezuela and Australia.

The first match in pool play will be on July 5. Opening ceremonies are on July 6, then the next match is on July 9, followed by a third match on July 10. For those who advance from pool play, the quarterfinal matches are on July 11 — three matches in three days in Israel’s heat. “Last time, we played every other day,” he observed.

Making it more difficult, the tournament has limited substitutions and no re-entry into matches. Goldfarb proposed greater substitutions, if for no other reason than each player has to raise or pay $8,000 to go to the games, and the current structure ensures at least four players will not play in a particular match. “To have four kids sit out each game is wrong,” he said.

The team heads to Israel on June 25 for a couple of training days, then will tour the country.

“On paper we’re probably better than we were in 2013, but the key element in 2013 was great chemistry among the players,” he said. If they find good chemistry this year, “we’ll be okay.”

While the pursuit of gold is going on, Goldfarb said “these Games are not only about winning and competing, but more importantly about the life altering experiences we will all have together in Israel, not just for a month, but for ‘forever’!”

He will be blogging about the Games here.