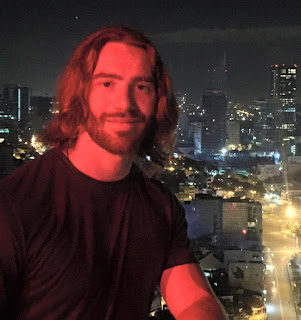 Chance Doyle in Vietnam in 2015, part of the journey that led to him discovering his Jewish roots.

When Chance Doyle leaves New Orleans for the World Maccabiah Games in Israel this month, winning the rugby competition is certainly a priority — but Doyle has more personal business to explore.

Having discovered only last year that he has Jewish ancestry, he is on a quest to pick up a torch that those who came before him felt compelled to put away.

Born and raised near Cottondale, Ala., Doyle said he grew up without much structure, or much of anything else, and had a rural education in trailers. He excelled in sports, but dropped out of school, which eliminated any chance of getting an athletic scholarship to college.

At age 15, he was in New Orleans when Katrina hit. He explained, “I’ve had a coming and going relationship with New Orleans since I was a child,” since his mother is a jazz and blues singer.

He emerged from Katrina with nothing but a single bag of possessions, but he ended up “picking up an oddly-shaped ball and diving into it.” Because he wasn’t in school, rugby “was the only thing I could play” competitively, and he did it well.

He quickly advanced to the top levels of the sport in America, and “that led to a tremendous network of individuals.” He wound up with the Maryland Exiles, living with the team captain. “They did a lot for me,” including paving the way for him when he was invited to try out for the national Under-19 squad.

He later moved to Atlanta and played rugby at Life University, becoming the first in his family to graduate from college.

Since returning to New Orleans, he has played for New Orleans RFC of the Red River Rugby Conference Division 1. He played with the USA Rugby South Panthers in 2013 and 2015, and in 2014 he played for the Elite Houston Sevens and Austin’s Negro y Azul.

He embarked on a global journey in 2015, having been invited to play for Johnsonville, New Zealand.

After New Zealand, he spent time in numerous countries, including Thailand, Vietnam and much of Europe, staying in homes and learning about different forms of spirituality.

In a lot of cultures, he appreciated that “there is a lot of connection to family.” In Polynesia, different generations are all under one roof. That was a connection he didn’t feel growing up.

When he returned to the U.S., he was determined to find “any and all family members I could.” He found a great aunt in Florida that he had never met and asked if he could visit, figuring she at least might welcome having a young guy around who could do things in the house.

They connected immediately and talked extensively. At one point, she mentioned how he had Jewish ancestry on his mother’s side. The family had fled persecution in Hungary, and “through mis-happenings,” they wound up in rural Alabama and “were persecuted.”

By the time he came along, “Judaism had kind of been left behind closed doors” and he had no idea of his family history. “When she shared it with me, it was that spark.”

“I’d never connected as anything,” he said. “I’d never been baptized.” He has taught spirituality in several situations, worked with Catholic groups, but “I’d always for some reason stood separate from everything.”

When he was working in New Orleans before Katrina, “I, like so many troubled kids, just believed in being the best of who is around us… if all you know is dealing drugs and you’re a naturally successful person, you’ll be successful at dealing drugs because that is what is around you,” but if they had been in the suburbs being measured by grades, they would be the most successful student.

An older couple took him in after the storm. “They changed how I saw the world.” Now, he feels a responsibility to be that person for other troubled youth in the New Orleans area.

Aside from pursuing rugby, Doyle makes himself available as a mentor while working as program director for Café Hope, a nonprofit culinary arts and life skills program for opportunity youth ages 17 to 24.

The faith-based organization is centered on a non-profit restaurant in Marrero that provides culinary training and life skills courses to the students. The seed-to-table restaurant has a 1.2 acre community garden providing most of the restaurant’s produce.

“The real job is creating a structure for the young people to excel in, and facilitate their growth,” he said.

Meanwhile, he is exploring what it means to be Jewish. “I’m very new to Judaism. I’m very new to all of this,” he said. He attended his first Seder at Chabad two months ago.

Last September, U.S. Maccabiah Rugby Coach Shawn Lipman was with the Maccabiah team in Aspen for the Ruggerfest tournament when he met up “with my old Eagle teammate and U.S. rugby legend Gary Lambert.” Lambert told him about Doyle and how he “relatively recently discovered his Jewish identity and had an amazing story,” so Lipman got in touch with him.

“In addition to him being an excellent rugby player, having played age grade national level and having played overseas, the most impressive thing about him was his sincerity about rediscovering his identity and representing his country in Israel,” Lipman said. “I had no hesitation in appointing him to the U.S. team.”

When Doyle joined the team in Las Vegas for an international tournament in February, Lipman said “Chance showed not only is he a top class rugby player but a true leader on and off the field.”

He is going into the tournament with a sense of responsibility.

“I feel as though my ancestors went through a lot,” he said. “It’s exciting for me to do something boldly representing the things they had to not be bold about.”

And the way for him to do that is through rugby, because it is one thing he can do “at a level to pay them respect” and “represent them.”

Knowing his Jewish roots, there is a sense of belonging “I’ve missed all my life,” he said. “Everything else is lagniappe.”

He is looking forward to his first Israel trip as his “first opportunity to represent that part of my heritage. It’s such a tremendous opportunity.”

Lipman said “I am so proud to see Chance have this life-defining experience playing the sport he loves, but also see him reconnect with his heritage, Israel, and bond with other Jewish rugby players and athletes from all over the world.”