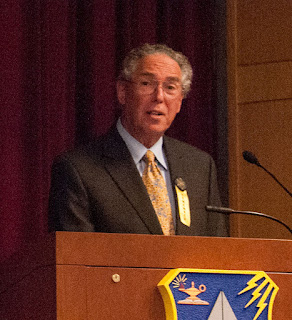 Rabbi Elliot Stevens, who has led Temple Beth Or in Montgomery for the last 10 years, died on June 21. He was 69 years old.

In mid-March, Stevens was diagnosed with stage four pancreatic cancer, two months after his wife, Sandy Lynn, was diagnosed with lymphoma. Stevens went on medical leave, telling the Reform congregation that “I am mindful of the many blessings I have received by serving as your rabbi — more than I ever thought would be possible.”

After word of his and his wife’s conditions came out, numerous area churches joined area synagogues in placing them on their prayer lists.

Beth Or President John Ives said the “devastating news… was a major shock for us all, something none of us were prepared for, emotionally or otherwise.”

Ives said Stevens “never slowed in his quest to bring a new and increased spirituality to our congregation,” from urging adoption of the new Reform prayer book to “his unwavering support” for the annual Jewish Food Festival.

Ives also cited Stevens’ outreach to the broader community and how “he sought to make our congregation a better home for all its members.  He was admired and respected throughout the community.”

Stevens was ordained at the Hebrew Union College-Jewish Institute of Religion in 1975. For 32 years, he worked away from the pulpit, at the Central Conference of American Rabbis in New York. He was associate executive vice president, overseeing the CCAR publications program.

Stevens ran conferences and conventions throughout North America and in Israel, managed a scholarly quarterly, served as a “rabbi’s rabbi” to his colleagues, and parliamentarian.

When he decided to move to the pulpit, he looked for a “hands-on” congregation instead of being part of a larger staff in a larger community. Beth Or has a membership of about 140 families.

Kramer noted that he and Stevens arrived in Montgomery about a week apart, but “from opposite directions” in their careers, as Kramer had just been ordained before starting at AIEA.

The two rabbis merged the congregations’ Confirmation classes, and then the entire religious schools. They also collaborated on a community interfaith Holocaust memorial service.

“We would meet at Starbucks often and just enjoy each other’s company,” Kramer said. “He had a wealth of knowledge about Jewish history that was just astounding.”

He is past president of Interfaith Montgomery, and has taught as adjunct professor at Huntingdon College since 2008. He participated in the National Security Forum at the Air War College at Maxwell Air Force Base in 2012 and is a 2013 graduate of Leadership Montgomery.

A memorial service is scheduled for July 9 at 2 p.m., at Beth Or.

“It will be hard not to be able to call Elliot and get advice about this or that,” Kramer said. “I will miss him even more as events come up that we used to do together.”

Rabbi Jonathan Miller, who is retiring from Birmingham’s Temple Emanu-El this month, will lead High Holy Day services at Temple Beth Or in September.

Beth Or “will at some point in the near future” start the search for Stevens’ successor, Ives said. “Today, we just wish to pause and remember all of the wonderful memories of Elliot Stevens’ all too short tenure at the Temple.”

(Updated June 26 to reflect the plans for the memorial service)