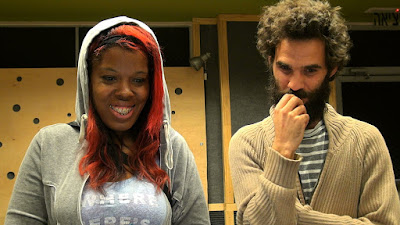 A documentary about an unusual musical connection between New Orleans and Israel will have its U.S. television debut this month on Public Television’s POV documentary series.

For years, Samantha Montgomery has worked in a New Orleans retirement facility, performing as Princess Shaw whenever she is given the opportunity to sing. A YouTube channel is her main creative outlet, where she posts new songs and musings about life.

“Presenting Princess Shaw” is the story of how Ophir Kutiel, an Israeli musician known as Kutiman, found one of her videos and turned it into an Internet sensation, making her famous before she even knew about it.

Directed by noted Israeli filmmaker Ido Haar, the film debuted in May 2016 and won Best Documentary at the Israeli Academy Awards last fall.

Kutiman is a musical prodigy living on a kibbutz in southern Israel. In 2009, he debuted “Thru You,” where he finds audio and video clips online and treats each as an instrument in a larger, cohesive work.

Haar said he has known Kutiman for many years, and Liran Atzmor suggested that Haar do a documentary about the first “Thru You” video mashup project. “When I saw it I was really amazed but it was too late,” he said. “Thru You” has received over 11 million hits.

When Kutiman started the next project, “Thru You Too,” involving Montgomery, “I started to play with the idea of making a documentary about musicians and singers from all over the world that discover they are part of this project,” Haar said.

He got in touch with Montgomery through Facebook. Montgomery said when she got the message “I was depressed and down” and figured it wouldn’t hurt to respond. “You can’t go no further” down, she figured.

Haar flew to New Orleans to meet her in a hotel lobby, which she found “emotional — someone thought I was important enough to come all the way from Israel to meet me.”

“Almost right away we felt comfortable with each other,” Haar said.

Montgomery said Haar was genuine, so she was going to be open and genuine with him, including mention of her struggles with a history of physical and sexual abuse as a child, by a boyfriend of her mother.

At first, Haar’s project was to include several of the musicians, but after filming in London and Washington, he returned to New Orleans and felt that Montgomery would be the story.

Over a nine-month period, Haar visited New Orleans several times, filming her disappointing audition for “The Voice,” following her to Atlanta, visiting the facility where she works.

Meanwhile, Kutiman was in Israel, taking Montgomery’s “Give It Up” a capella video, which had a few dozen views by then, and using it as the base of a video jigsaw puzzle, with sound samples and video clips of musicians from around the world. By now, the mashup video has received over 3 million views.

A Chicago native, Montgomery said she “didn’t want to be the kind of person to stay where I’m from.” She moved to Indianapolis with her mother and younger brother to escape gang violence, after her brother had been targeted to join a gang.

She spent two years in San Diego, then went back to Indiana where she shattered an ankle and had to learn how to walk all over again.

In 2005, she went with a girlfriend to New Orleans for a couple of weeks, then a month later returned for good. “I’ve been here ever since,” she said. “I love it. This is my city.”

Arriving for good just after Katrina, “there was still devastation. There weren’t any street signs, not many stores were open,” she observed, “but you could still feel the resilience in the air.”

Even when in Chicago she was a songwriter, “but I didn’t have the confidence in myself” and was very shy. In church, she would sing but hide behind people.

It wasn’t until she got to New Orleans that she found herself, and with her bright red hair and there-are-no-strangers outgoing personality she is hard to overlook.

In 2012, she got braces because she had long been self-conscious about her teeth. Then, while singing in the shower one day, she tested her voice, then suddenly hit some notes she did not realize she had inside.

Her new voice was “comfortable,” and she started her YouTube channel. At 3 or 4 in the morning, she would wake up and record songs, including the one that caught Kutiman’s attention.

Montgomery and Haar were in Atlanta the day Kutiman uploaded his version of “Give It Up.” Haar wanted to capture genuine surprise when Montgomery discovered that her song not only had been reworked, but was going viral.

It took a lot of effort to get that shot. Montgomery explained that she had been having trouble with her phone. Shortly after someone messaged her that they loved her voice, she got a notification that Kutiman had remade her song, but she didn’t think much of it because “a lot of people would remake my songs.” She tried to view it, but her phone wouldn’t load it.

“Every time she took out her cell phone I’m there with the camera,” Haar said. He explained it away, that he needed atmosphere footage. “Like a fisherman, I was sitting there silently, waiting. It was a big gamble.”

Finally the third notification spoke of a coming “Kutiman storm,” that her song was going viral. “Are you serious?” she thought, then viewed it. “It was so beautiful,” and she had wanted someone to do something with the song.

Haar recalled, “I was so moved, and it was also a relief for me that I managed to catch this moment.”

But Montgomery still did not make the connection between Haar and Kutiman. “He sent me a clipping from the New York Times” about Kutiman’s project, “and I still didn’t put it together” that Haar had known this was coming.

It also was a while before she realized the scope of the project. At first she thought the film about YouTubers was just going to be on YouTube. She never considered it would be a full-length documentary in theaters.

After the video took off, the next step was for Montgomery to visit Israel, meet Kutiman and perform to packed houses. For the first time, she needed a passport.

She also had to overcome skeptics at home. “People said they’re going to cut your head off, or sell you to the sex trade,” she said.

During her first visit to Israel, she found that Kutiman “is hilarious” and a genuine person, she said. “All we do is laugh.”

“He’s not big-headed,” she added. “He wears normal stuff, hangs out. They all are, and that’s why I love them so much.”

The friends she has made in Tel Aviv “are like family to me. I trust them with my life.”

“I love Israel. It’s my second home,” she said. And it is one she visits often, having gone six times since odyssey began.

Don’t be surprised to see her on Allenby Street in Tel Aviv, marveling at the outdoor culture and going into too many shoe shops.

One difference she sensed is that “In the states, you feel more of a racial thing. In Israel, I don’t. Everyone is just there having a good time.”

Twice, she also went to Jerusalem. “I don’t even know what to say,” she observed. “You can’t explain the beauty on film or video. You have to see it.”

In October 2016, she and Kutiman performed at the Tamar Festival by the Dead Sea. She “just sat” on the tour bus, enjoying it and being “there in the moment.” After endless landscapes of rock, there was a huge stadium. “It was so awesome to get on that stage. You could feel the energy.”

But crowd size doesn’t matter, she said, as long as there is energy. “I’ve had shows with five people and it’s the energy of 5,000.” One scene in the film shows her performing to an audience of four in a New Orleans club. “I didn’t care. I was there to sing.”

She saw the film for the first time at the premiere in Toronto, sitting next to Haar. “It was hard to look” at the parts about her childhood, she said. “I don’t like to relive stuff like that,” and has seen the film just twice.

Haar said Montgomery was okay with including those moments in the film. He said Montgomery and her mother “have this courage to confront the past and are managing to heal their connection by talking about it.”

“It’s what happened to me,” she said.

At the end of the film’s premiere, “everyone stood up and started clapping,” much to her relief and amazement.

“Presenting Princess Shaw” has been in numerous film festivals, including the Houston Jewish Film Festival, limited theatrical release and on numerous national television stations, from NHK World TV in Japan to the Canadian Broadcasting Company.

She has also been interviewed on numerous shows, including in Chicago, and on a parody of “The Ellen DeGeneres Show” on Israeli television.

Last fall, Netflix purchased streaming rights to the documentary, and it is also available on DVD.

It won Best Documentary at the Ophir Awards, referred to as Israel’s Academy Awards, and was nominated for a 2017 Critics Choice Award for best music documentary.

In otherwise positive reviews, Haar has been slammed by some film critics for keeping Montgomery in the dark about the true nature of the film. She shrugs it off, saying it was best that she did not know what Kutiman was doing behind the scenes. “It wouldn’t have been genuine” if she knew.

“In this lifetime, why not look for the positive,” she asks. To the critics, she says “if I’m not upset about it, why are you?”

After the film came out, “a lot of people say I inspired them,” Montgomery said. “They have no idea how much they inspire me also.”

She recently acquired a manager and now has a promotional video. “All I want to do is get on the stage and sing, drink bourbon.” She also is more aware of the “cutthroat” nature of the music business, having helped others online only to find that they have taken her musical hooks and abused her kindness. “That’s my blood, sweat and tears,” she said. “It came from my soul,” and she is more cautious about sharing.

She and Kutiman collaborated on a forthcoming album, doing 13 songs in three studio days during a 10-day visit to Israel. The first single, “Stay Here,” was released in March 2016 and has almost 225,000 views on YouTube.

While some have called the film a modern-day Cinderella story, the happily ever after part is still in the works. Music doesn’t pay the bills, so Montgomery still has her day job, though at a different facility than when the filming was done.

But she is patient. “I live in reality,” she explained. “Everything doesn’t work out the way we dream,” so she says she needs to rely on her current job.

She reflected that sense of reality in a lengthy piece on Israel’s Channel 2, when she was asked if she wants the Hollywood ending of being a superstar. “I don’t live in Hollywood,” she said. “I live in New Orleans.”

She has done a number of performances around the world to publicize the film but is still looking for opportunities in New Orleans. On July 9, she is performing in New Orleans at the Peace in the Streets festival.

No matter how things turn out, she said “I’m blessed by it all.”

Where and When to View: