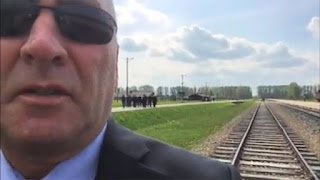 Louisiana Congressman Clay Higgins apologized for a video he took while touring the Auschwitz concentration camp and had posted on July 1.

Higgins, who is in his first term, said “my message has caused pain to some whom I love and respect. For that, my own heart feels sorrow. Out of respect to any who may feel that my video posting was wrong or caused pain, I have retracted my video.”

He has taken the video down, but it is still accessible on some news sites.

A follow-up tweet showed a sign outside the building stating that thousands were killed in the building, so “Please maintain silence here: remember their suffering and show respect for their memory.”

In the video, Higgins tours Auschwitz, stating that “a great sense of dread comes over you in this place” as he walked past the display of victims’ shoes.

He spent about a minute of the video inside the gas chamber and crematoria, speaking in a low voice with nobody else around, and describing what took place in that space. He then spoke outside the suffocation room where laborers were punished. “We must remember these things,” he said. “Man’s inhumanity to man can be quite shocking.”

Back outside, he added, “It’s hard to walk away from gas chambers and ovens without a sober feeling of commitment — unwavering commitment — to make damn sure that the United States of America is protected from the evils of the world,” and said in this age, with greater worldwide mobility, it is easier for threats to reach the U.S. mainland.

Manfred Klepper of Lafayette, who was six when the Nazis ransacked his home during Kristallnacht, told the New Orleans Times-Picayune that Higgins “made a spectacle” of a “sacred space.”

The Anne Frank Center for Mutual Respect, a little-known group until it criticized President Donald Trump a few months ago, called the video “disgusting beyond description” and Executive Director Steve Goldstein refused to accept Higgins’ apology.

In his statement, Higgins said he filmed the video “with great humility. My intent was to offer a reverent homage to those who were murdered in Auschwitz and to remind the world that evil exists, that free nations must remember, and stand strong.”

Higgins’ statement concluded, “The atrocities that happened at Auschwitz were truly despicable, and we must never let history repeat itself in such a way. I have always stood with Israel and all Jewish people, and I always will. We live in a dangerous world, and massive forces of evil do indeed yet exist. We must all stand united against those evils. My Auschwitz video has been removed, and my sincere apology for any unintended pain is extended.”