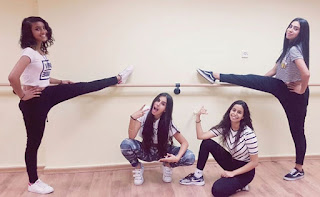 While organizers of the Maccabi Games in Birmingham strive to provide a Birmingham touch to various aspects of the games, the home team will also have an international flavor.

Organizer Sheri Krell said they are fundraising to help the groups come to Birmingham “to enrich the Maccabi experience.” A page has been set up at gofundme.com/MaccabiSisterCity. The Birmingham Jewish Federation and Birmingham Sister City Commission are also supporting the effort.

The delegations will arrive three days before the games, and stay an additional three days after. A slate of events so the athletes can see Birmingham sites is still in the works, but Krell said “we would love local families to join us for the weekend” and volunteer to help with the visitors.

The Rosh Ha’Ayin delegation will include four dancers and five basketball players. Hannah Halpern has been working to support dancers from Rosh Ha’Ayin and they will compete together on Team Alabama.

Halpern has been dancing since age two, and her Bat Mitzvah project in 2015 was raising funds for students in the Shubeliyot dance program at the Shabazi Community Center in a low-income section of Rosh Ha’Ayin. She visited and danced with them on a trip to Israel earlier this year.

The five Rosh Ha’Ayin basketball players will stay in the homes of Birmingham boys team members, and they will be on the same team in the tournament.

For one of the Rosh Ha’Ayin chaperones, Efrat Herman, it is a first-ever visit to Birmingham after years of working on the sister city relationship in the mayor’s office.

For most of the Ukrainian athletes, this will be the first time outside their country. Krell said Rabbi Yossi Friedman arranged two days for them in New York before they arrive in Birmingham.

Six of the Ukrainian athletes will be on the girls’ volleyball team with Birmingham, and six boys will be on Alabama’s soccer team. They will also have three adult chaperones. Dima Antselevich made a video, available on the fundraising page, where some of the athletes talk about what the experience will mean to them.

As the Levite Jewish Community Center is the only JCC in the state, teens from across Alabama are joining Birmingham on Team Alabama. Two athletes from Jackson, Miss., are also part of the home team.

Birmingham’s Jewish community established a relationship with Rosh Ha’Ayin through Project Renewal in 1982. The Kimerling Center, built by Birmingham’s Kimerling family, became a hub for the development town of 14,000.

Rosh Ha’Ayin, named for being the source of the Yarkon River, was established in 1949, mainly to house Yemenite Jews who started walking to Israel after Israel declared its independence. The new state sent planes to pick them up through Operation Magic Carpet, and the town’s logo includes the Biblical verse about returning to the land “on eagles’ wings.”

The famed Rosh Ha’Ayin Mandolin Girls Orchestra performed in Birmingham several times, and in 1982 Rosh Ha’Ayin presented Birmingham with a Yemenite Torah that is housed at the N.E. Miles Jewish Day School.

While most Project Renewal relationships ran their course, the relationship between Birmingham and Rosh Ha’Ayin endures. In the 1990s, a building boom tripled the city’s size with neighborhoods for immigrants from the former Soviet Union and retired Israeli military. A technology park was established, and in 2010 an oil field began production nearby.

Rosh Ha’Ayin is now a bedroom community for Tel Aviv and Jerusalem, with train service to Tel Aviv and Beersheva.

In 2005, Rosh Ha’Ayin became an official sister city for Birmingham, in a three-way signing ceremony with al-Karak in Jordan. In a highly symbolic and historic event, the ceremony was held at Birmingham’s Civil Rights Institute.

Today, Rosh Ha’Ayin has about 43,000 residents, and regards itself as Israel’s music city. It is also a Partnership2Gether community with New Orleans, with active music and culinary exchanges.

Founded in 1363, Vinnytsia became a sister city to Birmingham in 2003. Located 160 miles southwest of Kiev, Vinnytsia is the administrative center of its district and has a population of about 375,000.

As part of the Soviet secret police’s Great Purge in 1937, there was a mass execution in Vinnytsia. In 1941, German troops occupied the area, and in 1943 the mass graves from the purge were discovered.

Hitler located his easternmost headquarters nearby, and the city’s Jewish community became virtually extinct through three massacres. An iconic photo taken in 1942, discovered in a German soldier’s photo album in 1944, was titled “The Last Jew of Vinnytsia,” though a handful had escaped and joined the resistance.

After the war, Vinnytsia became an industrial city, with 19,500 Jews in 1959. Over the last two decades, much of the community emigrated to Israel, the United States and Europe.

In 2011, Limmud FSU chose Vinnytsia for its educational weekend, a response to the 70th anniversary of the Nazi takeover of the area.
Ukraine’s current prime minister, Volodymyr Groysman, is Jewish and was previously mayor of Vinnytsia.