Olympic-style Maccabi opening ceremony will be at Bartow Arena 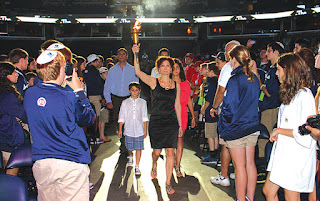 At the 2012 Maccabi Games in Memphis, Oshrat Romano Kandell brought in the torch. She is the daughter of Yosef Romano, one of the Israeli Olympic athletes killed in the 1972 Munich Olympics

Every major athletic competition needs a big opening ceremony, and the JCC Maccabi Games in Birmingham are no different.

As many as 5,000 are expected to attend the July 30 ceremony at Bartow Arena, on the campus of the University of Alabama at Birmingham.

The opening ceremonies are being chaired by Anna Slive Harwood and Alison Berman.

There will be an Olympics-style procession of the teams into the arena. The 10-foot cauldron for the torch lighting is being forged at historic Sloss Furnace, and after the games will be displayed at the LJCC.

There will also be a ceremony in remembrance of the 11 Israeli athletes killed by terrorists in the 1972 Olympic Games. One of them, David Berger, attended Tulane University in New Orleans.

It was announced that renowned Cantor Alberto Mizrahi, one of the world’s leading interpreters of Jewish music, will perform, as will Matisyahu.

Mizrahi will be at the July 28 Shabbat service at Emanu-El, starting at 5:40 p.m. The oneg that night is sponsored by the Slive Harwood and Berman families in honor of the opening ceremonies.

It was also previously announced that Auburn Basketball Coach Bruce Pearl will be among the speakers at the opening ceremony. Robert Levin, the voice of the University of Alabama Million Dollar Band, will emcee.

There is also a Junior Maccabi group for those ages 7 to 11 to participate in the opening ceremonies.

JCC members will receive an invitation to pick up tickets to the opening ceremony. Additional tickets may be coordinated through the LJCC office. For security reasons, everyone in attendance must have a ticket or credentials.