Matisyahu criticized for shoving teens off stage at Maccabi opening 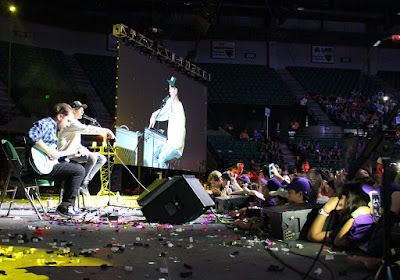 Reggae star Matisyahu is facing criticism for shoving teenage fans off the stage during his performance to close out the JCC Maccabi Games opening ceremony in Birmingham on July 30.

Matisyahu’s appearance at the ceremony had been a closely-guarded secret before the event. At one point during his show, a couple dozen teens had made their way onto the stage, unhindered by security, and started dancing behind and around him. One of the athletes was standing to Matisyahu’s right and hit a beach ball into the crowd. The central Florida delegation had been bouncing the ball through the venue all evening.

A moment later, when an athlete was walking toward where Matisyahu was sitting, Matishayu got up from his seat and shoved the teen into a monitor at the edge of the stage. While some have reported that one of the teens had knocked Matisyahu’s hat off of his head, it is unclear in the video whether that happened or if the hat fell off during the shove.

Another teen who was getting on the stage during that time started walking past Matisyahu, who had just put his hat back on. The singer grabbed the teen by the shirt and did a two-handed shove off the stage and into the crowd. Matisyahu then shoved another teen who had been walking by toward the back of the stage. None of the three teens who were shoved engaged him further.

As the third teen was shoved, security personnel started clearing the rest of the dancers from the stage. Many had already started to back away.

Rabbi Barry Leff, interim rabbi at Birmingham’s Temple Beth-El, said the teen who was shoved off the stage was his daughter, Devorah, who was participating on the Birmingham girls volleyball team. “Fortunately, all she got was some minor scrapes,” he said. “But it’s unbelievable what Matisyahu did.”

He was infuriated that a grown man would treat a teen girl that way. He added that he has an uncle who was killed by a head injury when he fell the wrong way.

Some have questioned why security had not prevented the athletes from being on stage, and noted that spectators who do go onstage at concerts are often forcibly removed. Others say this was a celebration instead of a formal concert.

Leff said “If the kids had crowded the stage with the other performer, Cantor Alberto Mizrahi, I’m sure he would have given them hugs instead of violence.”

The opening ceremony was held in Bartow Arena. After the conclusion of the formal ceremony, when Matisyahu started performing, the roughly 900 athletes came down from their seats and gathered in front of the four-foot stage to dance and watch the performance.

The Jewish Community Center Association issued a statement saying “We are disappointed and dismayed that our opening concert performer, Matisyahu, forcibly removed some of our teen participants from the stage, and we will cooperate with any police investigation. Violence is never acceptable… This is contrary to what we instill in our participants and in what we believe. We are relieved that the participants involved were not seriously injured.”

Local Maccabi organizers, while disappointed by the incident, want the focus to be on the positive aspects of the game and are letting the national organization handle the controversy.

Leff noted, “It’s disappointing that the opening ceremony of the Maccabi Games here in Birmingham was marred by this — the ceremony itself was really well done.”

While many who were at the event are calling for an apology to the community, there has not been any response from Matisyahu. Aside from the shoving, many have remarked that Matisyahu’s performance was brief and uninspired.

Ironically, in a 2011 concert in Birmingham, Matisyahu brought a large proportion of the audience onstage during his final encore.