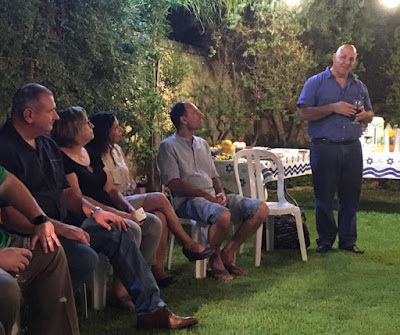 Above: Participants in the emergency response mission to Israel are welcomed in Rosh Ha’Ayin, New Orleans’ Partnership2Gether community.

Medical and emergency health care professionals from throughout the New Orleans area are traveling to Israel this month to learn and share best practices for dealing with catastrophic events, from natural disasters to terrorist attacks.

Doctors, nurses, administrators and paramedics are spending Aug. 5 to 12 in Israel as part of an initiative by the Jewish Federation of Greater New Orleans to introduce local medical personnel to Israeli emergency response practices.

The visit is a follow-up to a symposium in December 2013 when Israeli emergency response professionals traveled to New Orleans to participate in discussions on crisis management, operational readiness, emergency response best practices and trauma protocol.

The Jewish Federation of Greater New Orleans organized both exchanges as part of the Jewish Agency for Israel’s Partnership2gether Peoplehood Platform.

Participants also will take part in a mass casualty simulation at Carmel Hospital in Haifa and ride in an ambulance with Magen David Adom, Israel’s national emergency medical service.