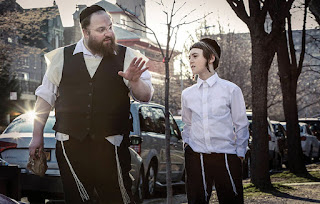 The festival draws audiences from around the world and has been rated by several sources as one of the top 10 independent film festivals in the U.S. Over 260 films will be screened, from full-length features and documentaries to shorts, animated shorts, music videos, kids shorts and teen films.

Sidewalk will screen films in 11 venues within Birmingham’s historic Theatre District, including the Alabama Theatre — a 2,200-seat movie palace built in 1927 — and the newly restored Lyric Fine Arts Theatre, built in 1914 for the Vaudeville circuit.

The festival also includes the SHOUT film festival, devoted to showcasing independent films and filmmakers in the LGBTQ communities.

One of the selected feature films in this year’s Sidewalk Film Festival is “Menashe,” which will be screened at the Alabama Theatre on Aug. 27 at 2:45 p.m. The drama by director Joshua Weinstein and writers Alex Lipschultz and Musa Syeed debuted at the Sundance Film Festival.

As it has an all-Hasidic cast and is in Yiddish, it is unusual as a foreign language film that was made in the U.S., and is a rare glimpse into a little-seen aspect of Jewish life.

“Menashe” is based on the real-life issues Menashe Lustig faced. A widower, he finds that the community leadership has declared his home unfit for his son until Menashe remarries. While asking why someone else has to determine how his house is run and how his personal life should look, he has to navigate remaining part of the community while being a parent in a difficult situation.

Two documentaries feature Jewish subjects who should be better-known than they are. “Bang! The Bert Berns Story,” Aug. 27 at 4:30 p.m. in the Red Mountain Theatre Company’s Cabaret Theatre, tells the story of a noted 1960s songwriter and record producer. The film, by his son Brett Berns and Bob Sarles, premiered at the 2016 SXSW Film Festival.

Born to Russian Jewish immigrants, Berns had rheumatic fever as a child, damaging his heart and leading to his death at the age of 38 in 1967. He was also known as Bert Russell and Russell Byrd.

Berns founded BANG Records and the R&B label Shout Records. A 2016 inductee into the Rock and Roll Hall of Fame, Berns’ writing credits include “Twist and Shout,” “Everybody Needs Somebody to Love,” “I Want Candy” and “Hang On Sloopy.”

Producer credits include “Under the Boardwalk,” “Piece of My Heart” and “Brown Eyed Girl.”

“The B-Side: Elsa Dorfman’s Portrait Photography” will be screened on Aug. 26 at 10 a.m. at the Lyric Theatre. Since 1980, Dorfman has done portraits with one of only eight large-format Polaroid cameras ever made, using 20×24 film. Polaroid went out of business in 2008, making her photography more challenging.

Her portraits are done with a plain white background, and she takes two pictures. The subject then gets to choose which one to keep. Dorfman keeps the other one, “the B-side,” which often have a blink or less enticing expression.

Academy Award-winning director Errol Morris has known Dorfman for decades, and after spending an afternoon with her looking at the Polaroids and hearing her stories, he knew there was a movie to be made.

A “nice Jewish girl from Boston,” Dorfman was at MIT to pursue a career as a teacher when she was handed a camera, and she was hooked. She took portraits of local writers and became friends with Allen Ginsberg.

After discovering the large format camera, which she pestered Polaroid to let her borrow, she continued as a portrait photographer, not doing photography for gallery shows.

“Lemon,” on Aug. 26 at 7:40 p.m. at the Alabama Theatre, is a quirky piece directed by Janicza Bravo and written by Bravo along with Brett Gelman.

Gelman plays Isaac Lachmann, an off-putting lead whose blind girlfriend of 10 years leaves him, causing more of a downward spiral. He tries to woo another, and one lengthy scene is an eccentric Passover Seder with his family.

Jewish director Nathan Silver’s “Thirst Street” will be at the RMTC Cabaret Theatre on Aug. 26 at 7:40 p.m. In it, Gina, an American flight attendant emotionally paralyzed by her lover’s suicide, falls in love with a Parisian bartender on a layover, only to find herself tangled in a web when an old flame of the bartender suddenly returns.

The opening night film Aug. 25 will be “Step,” a documentary about a charter high school for low-income girls in Baltimore, focusing on improving the students through a step dance team.

The closing night film Sunday night is “My Friend Dahmer,” about the teenage years of serial killer Jeffrey Dahmer.