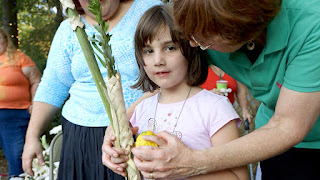 Emily learns about Sukkot at Temple Emanu-El in Dothan, in the documentary “There Are Jews Here.”

“There Are Jews Here,” a film about disappearing Jewish communities in Laredo, Tex.; Latrobe, Pa.; and Butte, Mont.; contrasted with the Dothan Jewish community, will be part of the Capri Cultural Film Festival in Montgomery on Aug. 20, and will be screened in Shreveport in September.

The festival showcases different ethnic groups in Montgomery, as seen in motion pictures. The festival kicks off at noon with “Trail of Tears” and photographs from the Hugh Rozelle Collection, presented by the Poarch Band of Creek Indians.

At 1:30 p.m., “There Are Jews Here” will be screened, presented by the Jewish Federation of Central Alabama. Film producer Brad Lichtenstein said it was eye-opening to realize that there are 1 million Jews in smaller American communities, with a vastly different experience than he had living in Atlanta, Milwaukee and New York.

The filmmakers spent a great deal of time in Dothan, chronicling the life of Temple Emanu-El and detailing the incentive package that lures Jewish families to the area in an effort to keep the community vibrant.

“There Are Jews Here” debuted last summer at the San Francisco Jewish Film Festival. This is the first theatrical screening in Alabama, and it is also scheduled to be shown at Agudath Achim in Shreveport on Sept. 9 at 7:30 p.m.

The festival concludes with the little-known but significant 1964 film “Nothing But A Man,” presented by Jacqueline Allen Trimble, chair of the Department of Languages and Literatures at Alabama State University, at 3:30 p.m.

Admission to the film festival is $5, and advance tickets will go on sale on the Capri’s website at noon on Aug. 13.