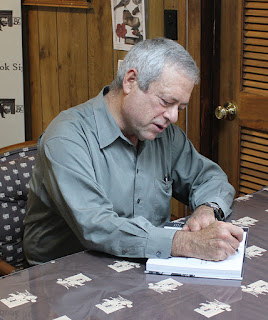 In June, Rabbi Jonathan Miller had a book signing for “Legacy” at the Alabama Booksmith

On Aug. 24, the Grafman Legacy Luncheon will be a “roast and toast” of Miller and his family. Reservations are requested by Aug. 21, and a $10 contribution at the door is appreciated.

The Rabbi Jonathan Miller Enduring Legacy Fund has been created within the Grafman Endowment Fund. The endowed fund will provide a perpetual source of income for the senior rabbinic position, “to help preserve his commitment to Jewish values and ensure the continued tradition of strong and visionary spiritual leadership.”

On Aug. 25, the 5:40 p.m. service will be a community celebration, followed by a grand reception.

As part of the evening, donors to the Enduring Legacy Fund will be recognized, and there will be a new recognition wall. The congregation is placing gifts honoring Miller into that fund.

Emanu-El’s website will have an online tribute where community members can submit their own tributes and well wishes, along with up to three photos. They will also be collected and put into book form, for a presentation to Miller. The deadline to be in the book version is Aug. 10.

On Aug. 27, Miller and Rev. Stephen Jones will be the guest speakers at Southside Baptist Church’s 10:30 a.m. service. They will reminisce and celebrate the historic relationship between the congregations, dating back to when Emanu-El held High Holy Day services at Southside Baptist in 1913 when the Emanu-El building was not quite finished.

More recently, that relationship deepened when Emanu-El was renovating its building and met at Southside Baptist for 14 months in 2001-02. As Emanu-El’s Torahs were marched two blocks to the church, Miller wondered if the congregation was going to follow him into a Baptist Church, but Jones and his congregation embraced their guests.

Ordained in 1982, Miller came to Birmingham from the Stephen S. Wise Temple in Los Angeles. He also had served at Temple Shalom in Auckland, New Zealand.

In October, Miller gave congregants at Yom Kippur services a copy of a book he had just published, “Legacy: A Rabbi and A Community Remember Their Loved Ones,” a collection of eulogies he has given over the past 26 years.