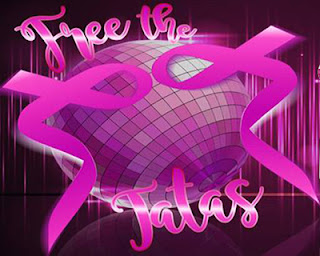 A body painting disco dancing event to “Free the Tatas” will honor Cathy Bart and Judy Lieberman while raising awareness and support for Hadassah’s breast cancer and genetic research programs.

The Sept. 9 event at The Cannery also is part of the centennial year celebration for Hadassah New Orleans.

The Disco Ball will include “The Big Reveal” of artworks from Paint Day. On March 19, 18 volunteer models, many of whom are breast cancer survivors, had their torsos painted by local, well-known artists at Northshore Jewish Congregation. They were then photographed, “baring it all for A.R.T. — Awareness, Research, Treatment.”

The Disco Ball will also include an auction featuring Chuck Mutz from The Black Tie Auctioneer. Entertainment will be provided by Crescent City DJ, with a special performance by Trixie Minx.

Bart and Lieberman said they and many other family members carry the BRCA2 gene, and they have taken proactive measures to decrease their breast cancer risk. With support for the event, they hope to “reach out to many others to show that we are all connected, not only by genetics but by our desire to make a difference in the lives of so many of us who have been touched in one way or another by this disease.”

On Aug. 17, there was the last Free the Tatas social in a series of events leading up to the Disco Ball. The social was at Cava.

For the Disco Ball, “Good Vibes” tickets for age 40 and younger are $85. “Rock On” general tickets are $150. Patron tickets start at $250 and include a commemorative poster.

There is also a $36 “Donation for a Friend” opportunity to honor or memorialize a friend. Additional names are $18.