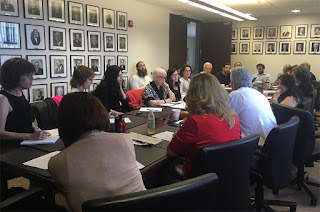 Twelve years after scores of people from the New Orleans Jewish community found themselves in Houston for long periods of time after Hurricane Katrina, New Orleans is returning the favor.

The Federation is serving as the clearinghouse to make sure all of the partners’ efforts are easily accessible. A webpage has been set up detailing the New Orleans response to the unprecedented flooding in Texas.

After Katrina, the New Orleans Federation set up shop at Houston’s Jewish Federation for several months, coordinating the recovery until they could move back into their offices.

The New Orleans Federation’s web page has listings of what to donate, with drop off points at both Jewish Community Centers, Torah Academy and, for gift cards only, Jewish Family Service.

The Jewish Community Day School and Torah Academy in Metairie are welcoming Texas students tuition-free for the rest of the school year. The Day School already has a Kindergarten student from Texas enrolled.

The task force is also signing up “buddies” to serve as counselor/advisors, collecting volunteer information to help gut/muck houses, and collaborating with Second Harvest Food Bank’s efforts to get supplies into shelters through Texas and Louisiana.