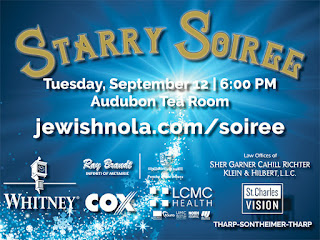 The Arnie Fielkow era kicks off for the Jewish Federation of Greater New Orleans with its 104th annual meeting, Sept. 12 at the Audubon Tea Room.

Fielkow began as the Federation’s new chief executive officer on Aug. 15. He succeeds Michael Weil, who had led the Federation since 2006 as New Orleans rebuilt its community following the levee breach in 2005.

The Federation and Jewish Endowment Foundation of Louisiana will hold their elections and welcome new officers and board members. The Federation will celebrate the 2017 annual campaign and recognize co-chairs Kathy Shepard and Maury Herman, and welcome incoming president Henry Miller while honoring outgoing president Eddie Soll.

A reception with a cash bar will begin at 6 p.m., and the meeting will start at 6:30 p.m. A kosher dinner will follow.

The agencies will also present their annual awards as part of the evening.

Joan Berenson will receive the Roger Bissinger Memorial Award. A past president of the New Orleans Section of the National Council of Jewish Women and national board member who instituted Major Gifts, Berenson was part of the group that established JEF.

She also is a Federation past president, having become passionate after going on the inaugural UJA Young Leadership Mission to Israel in 1961. In the 1990s, she chaired the Jewish Identity and Continuity Task Force; and after Hurricane Katrina, she chaired the task force designed to recruit and retain Jewish residents in New Orleans.

Ashley Merlin Gold is the Herbert J. & Margot Garon Young Leadership Award honoree. A New Orleans native, she co-chaired and helped launch JNOLA, the Federation’s young professionals group. She is on the Federation board and the executive committee of Jewish Family Service.

A professional photographer, she is active in several groups that maintain and restore New Orleans statues and monuments, and her first book was “Statuesque New Orleans.”

Denver native Nicole Harvey stayed in New Orleans after graduating from Tulane in 2012, and will be recognized with the Cohen-Jacobs Emerging Leader Award.

Harvey is on the board of JNOLA and is becoming involved in the Jewish Community Relations Council. She is co-founder and chief marketing officer of Mason-re, a company focused on sustainable products, hosts a bluegrass radio show on WTUL and has served on the station’s executive board for many years. She is also on the planning committee for Wednesday at the Square, a free 12-week concert series that raises money for the various projects of the Young Leadership Council.

The Anne Goldsmith Hanaw and J. Jerome Hanaw Tikkun Olam Award will be presented to Lisa Heller and John Haspel.

Heller moved to New Orleans from Baltimore in 1980 and works as a paralegal. She is a past Annual Campaign co-chair and past president of Jewish Children’s Regional Service.

Haspel, a New Orleans native, has served on the boards of Temple Sinai, JFS and the Jewish Community Center, as well as serving on the executive board of JEF.

Currently, Haspel is a board member of Young Audiences of Louisiana and Avodah, and serves as president of DJR Foundation housed at the Greater New Orleans Foundation. The Haspels support various non-profits including Posse New Orleans, Teach for America, Breakthrough Collaborative New Orleans and KaBOOM!, the playground builders.