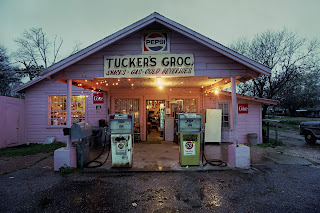 Siegel was born in Selma in 1958. He became interested in photography while taking a night class at the University of South Alabama, and spent a lot of time at a Selma art gallery owned by his uncle, who was also named Jerry Siegel. He became a commercial photographer in Atlanta, then started doing art photography.

A portrait photographer, after buying a Fuji Panorama film camera around 2002, he started documenting scenes around Selma. He decided “to shoot some places that were iconic to me, or about Selma,” especially because he noticed some buildings from his youth were disappearing. “I shot the Temple. I shot the old YMCA. Uncle Jerry’s. His house, my house… places that were important to me.”

He then started the Ten Jews Left project, doing portraits of the last members of Selma’s small Jewish community. It’s now about five Jews left, he commented. One of Siegel’s photographs depicts an electric Chanukah menorah in front of an air conditioner in what used to be the rabbi’s office at Mishkan Israel.

After shooting primarily in Selma and Marion, he added a few more areas in the Black Belt, so named for the rich soil in that region. He would add to the project on each visit, so the images in the book are from between 2002 and 2015.

Even though the book is out, “I don’t see this project ending right now.”

The Georgia Museum of Art published the book through the University of Georgia Press. Siegel noted that Museum Director William U. Eiland is from Sprott, just up the road from Selma, a town best known for William Christenberry’s photograph of the Sprott Store. Eiland said “These photographs speak of deep attachment, of reasoned critique, of the vagaries of memory.”

Siegel noted, “I do better work when it’s a project I’m connected to and feel more passionate about. Being home is about as passionate as you get.”