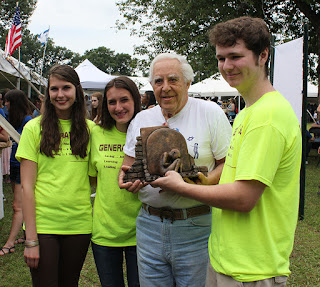 At the Memphis Friends of Israel festival in 2014, Jack Cohen, who hid in a monastery from the Nazis for two years, was presented a miniature of the Unknown Child sculpture

On Sept. 19, the Desoto County Museum in northwest Mississippi will debut the Unknown Child memorial exhibit, about an area school’s attempt to memorialize the 1.5 million Jewish children who were victims of the Holocaust.

Diane McNeil, president of the Unknown Child Foundation, said the exhibit will be a miniature version of a full-scale permanent installation that the foundation is planning.

The project began with three teachers at Horn Lake Middle School who wanted to increase student awareness of the Holocaust. A Pennies Project was started, to collect 1.5 million pennies, to represent the 1.5 million children.

The next year, a home school group joined the initiative, Peabody Place Mall in Memphis allowed the students to scoop up the pennies in the mall fountain, and relationships were developed with the Memphis-area Jewish community. The students also wrote to celebrities, politicians and athletes to reach the goal.

After three years, they had amassed the 1.5 million pennies, and plans began to establish a children’s Holocaust memorial in the area.

The foundation commissioned sculptor Rick Wienecke to create a piece for the project. He took his inspiration from the “Oratorio Terezin,” which was derived from the “I Never Saw Another Butterfly” book of children’s poetry from Terezin.

The Unknown Child sculpture depicts a child leaning against the inside of a crematorium door, reaching to the other side to clutch a piece of ground covered with olive branches, representing Israel.

In March 2016, the foundation announced a partnership with the Circle G Ranch in Horn Lake, which will be the site of the memorial. The property was once a retreat for Elvis Presley, and includes his honeymoon cottage and stables.

The property is being redeveloped into a tourist attraction by Davage Runnels Jr., and is expected to include a welcome center, restaurant and dynamic water feature on the property’s lake.

When the plan was announced, the pairing of a children’s Holocaust memorial to an Elvis project was explained through Elvis’ Jewish connection. He had a longtime relationship with the family of Memphis Rabbi Alfred Fruchter, and ancestors on his mother’s side were Jewish. When his mother died in 1958, he made sure to include a Star of David on her tombstone, and he sometimes wore a Chai necklace in concert.

The project recently embarked on a “place-a-penny” campaign, where pennies in the memorial park walls can be dedicated in someone’s honor or memory, for $18 each.

The exhibit, which will be displayed through March 10, will showcase the sculpture, some of the collected pennies, framed photos and stories of some children who died in the Holocaust, details and models of the planned memorial, and the story of the Pennies Project.

An opening event is planned for Sept. 17. The planned program includes Rabbi Levi Klein of Memphis, Holocaust survivor Leonid Saharovici and Mississippi Governor Phil Bryant, and some of the students who have been involved with the project.

The museum is located on 111 East Commerce Street in Hernando, and is open Tuesday to Saturday, 10 a.m. to 5 p.m.