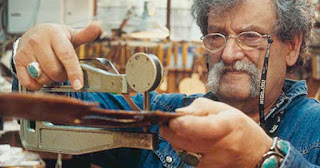 Half a century ago, a Holocaust survivor brought Amnon Weinstein a violin to restore, but he couldn’t bring himself to do it. The violin had been played in the concentration camps, and when he opened the case, ashes fell out.

Weinstein’s father, a violin maker from Lithuania, had moved to Israel and opened a violin shop. But over 400 other family members were murdered by the Nazis.

For many in the camps, the violin was a way to stay alive. As death transports arrived, musicians played orchestral music to give the arrivals a sense of security — before they were killed. Being in the orchestra was a ticket to survival, at least for a while.

In 1996, after several similar requests over the years, Weinstein decided he was ready to restore violins that had been in the death camps, and it became his mission.

Now, he has restored more than 60 “Violins of Hope,” and some of them will be displayed in Birmingham next April, centered around an Alabama Symphony Orchestra concert with the violins.

The concert will be on April 14 at 8 p.m. at the Alys Stephens Center, conducted by Carlos Izcaray.

The violins will be displayed from April 10 to 15, and there will be educational programs, lectures and exhibits in conjunction with the visit.

Some of the violins have a Star of David on the back. Others have names and dates inscribed inside. Each one has a story.

The Birmingham project begins with a Sept. 17 talk by musicologist and author James Grymes, author of “Violins of Hope: Instruments of Hope and Liberation in Mankind’s Darkest Hour,” which won the 2014 National Jewish Book Award in the Holocaust category.

The 2 p.m. program is at Temple Emanu-El, with a book signing after the program. The free event is sponsored by the Birmingham Holocaust Education Center, Violins of Hope-Birmingham and the University of Alabama at Birmingham Institute for Human Rights.

Grymes is a professor at the University of North Carolina in Charlotte. The first United States appearance of the violins was a two-week visit in Charlotte in 2012. In 2015, the violins were brought to Cleveland for a series of programs.

Sallie Downs of Birmingham saw a televised concert of the violins from Cleveland. Last year, she met with Weinstein in Israel to convince him to bring the violins to Birmingham.

The Birmingham concert will also kick off a new interfaith human rights fund started by Gail and Jeffrey Bayer.

The violins have been only a few other places, including south Florida, Berlin, Rome and Venice.