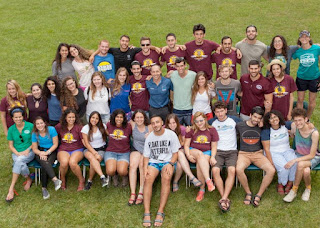 Jewish summer camps around the country are mobilizing to fight a provision that is seen as endangering the camps’ ability to have Israelis on staff each summer.

According to the American Camp Association, the J-1 Camp Counselor program has been targeted as part of President Donald Trump’s April executive order, “Buy American and Hire American.” The order referred to U.S. Department of State cultural exchange programs that were viewed as taking jobs from Americans.

The J-1 program is part of the J Visa Summer Work Travel program, which is used by camps of all types. “These placements are critical to the camps involved,” the ACA said.

An Aug. 27 article in the Wall Street Journal indicated the J-1 program was specifically targeted for a review over the next month.

In early September, the Foundation for Jewish Camp convened a meeting of the major Jewish camp movements, sending a letter to the Trump administration urging the preservation of the J-1 visa program.

Jeremy J. Fingerman, CEO of Foundation for Jewish Camp, and Peter J. Weidhorn, board chair of Foundation for Jewish Camp, explained that “reduction in these vital programs will result in the loss of thousands of American jobs as camps may be forced to downsize or close, in addition to the loss of key cultural experiences and exchange efforts intrinsic to the summer camp experience.”

The foundation notes that there aren’t enough Americans to fill all of the seasonal camp positions, especially in rural areas, and without the visiting workers, some camps might have to close, endangering American jobs.

“Camps must compete with local businesses, internships, school commitments, and summer educational programs in order to find staff willing to work during the short camp season, often in remote and rural areas,” according to the Foundation for Jewish Camp. “This year, 65 percent of camps report facing increased challenges recruiting and retaining high quality staff compared to previous years.”

While the national camping organization is emphasizing the economic harm, Jewish camps are stressing the deep connections that Israeli staffers bring to the camp experience.

The Religious Action Center of Reform Judaism said much of the powerful experience of the movement’s summer camps “comes from the presence of Israeli counselors and other international staff who enrich the experience each summer. Learning about Israel from Israelis and building personal connections to the Jewish homeland makes URJ camps unlike any others.”

Geoffrey Menkowitz, director of Ramah Darom in north Georgia, said this summer, “the Ramah Camping Movement sponsored over 250 Israelis to serve as camp counselors, over 40 of whom worked at Camp Ramah Darom.”

“Mishlachat have worked at Ramah camps for 70 years,” Menkowitz said. “They are more than just seasonal summer employees and cannot be replaced by local workers. Mishlachat are part of our family, providing our Ramah communities with enduring ties to the land of Israel — and more importantly, to the people of Israel.”

In a message to camp families, the Henry S. Jacobs Camp in Utica said “A summer of Jacobs Magic is not complete without our Mislachat helping prepare a falafel dinner, a photographer with an accent that isn’t Southern, our new Mexican family, and a certain Polish operations crew member who does way more than just operations.”

The movements are urging families to contact their Congressional representatives, State Department and the White House to support the visa program.

Elan Schwartz of Chicago, a long-time camper at Ramah Darom, mentioned pride in America as a motivation for keeping the program intact. In a letter to his senators, he said the visitors’ “love and fascination with America and its people gives all of us a new sense of pride and belonging in our country.”