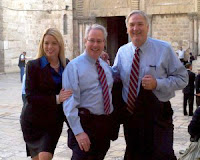 Alabama is seen as a very pro-Israel state, especially among elected officials, and it looks like that will not change regardless of the result of the Aug. 26 Republican runoff for U.S. Senate between Senator Luther Strange and former Alabama Chief Justice Roy Moore.

As Alabama Attorney General, Strange was part of a delegation of state attorneys general in a 2011 America-Israel Friendship League trip to Israel. According to the group, the purpose was “to facilitate a better knowledge and understanding of the Israeli government structure and the historic relationship between the two nations.”

“I am deeply honored to represent the State of Alabama and to be among those privileged to extend the hand of America’s friendship to the people of Israel,” Strange said. “Alabama has a special link to Israel because of our strong economic development ties, particularly through our space and defense industries. I am pleased to be a part of fostering this important relationship between their people and ours.”

He also has been to Israel as part of a church trip with St. Mary’s on the Highlands Episcopal Church in Birmingham.

In June, Strange co-sponsored a Senate resolution commemorating the 50th anniversary of Jerusalem’s reunification, calling on Trump to move the U.S. Embassy to Jerusalem. It passed, 90-0.

“Over half of the world’s people practice faiths with roots in the holy sites of Jerusalem, and the city continues to be the centerpiece of America’s own cherished friendship with Israel,” Strange said. “The coexistence and cooperation demonstrated by those who call Jerusalem home give us hope as we continue to encourage lasting peace. I was proud to cosponsor this resolution and join my colleagues in marking such a significant milestone in the history of the Holy City.”

As an Alabama judge, Moore has not had an opportunity to weigh in on Middle East issues. His website and campaign materials barely mention the Middle East, even though he has spoken nationally for years about the Biblical heritage of the United States.

On Sept. 11, the Alabama Daughters for Zion organization circulated a statement on Israel by Moore, which started by saying the U.S. and Israel “share not only a common Biblical heritage but also institutions of representative government and respect for religious freedom.” He traced Israel’s origin to God’s promise to Abram and the 1948 creation of modern Israel as “a fulfillment of the Scriptures that foretold the regathering of the Jewish people to Israel.”

Moore’s statement includes five policy positions, including support for U.S. military assistance to Israel, protecting Israel from “Iranian aggression,” opposing boycotts of Israel, supporting Israel at the United Nations, and supporting direct Israeli-Palestinian negotiations without outside pressure. He added, “as long as Hamas and the Palestinian Authority wrongly refuse to recognize Israel’s right to exist, such negotiations have scant chance of success.”

While those views would give Moore common ground with much of the Jewish community regarding Israel, most of the state’s Jewish community has been at odds with Moore over church-state issues, such as his displays of the Ten Commandments in courthouses, and his outspoken stance against homosexuality, both of which led to him being ousted as chief justice.

The winner of the runoff faces Doug Jones in the December general election. A former U.S. Attorney, Jones is best known for his prosecution of two Ku Klux Klan members for killing four girls in the 1963 bombing of Sixteenth Street Baptist Church.