“Why? Explaining the Holocaust” series hosted by BHEC 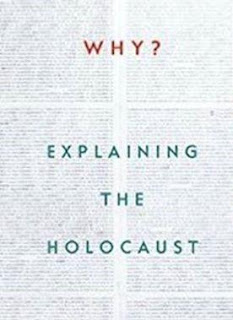 By popular demand, the Birmingham Holocaust Education Center will offer its first Community Education Series, based on the book “Why? Explaining the Holocaust,” by Peter Hayes.

The book has eight chapters, each based on a common question posed by Hayes’ students during his 30 years of teaching at Northwestern University.

A different facilitator will lead the discussion each month. No prior knowledge of the Holocaust is required, but participants are asked to read the chapter before that month’s session.

The series starts on Oct. 3 with “Targets: Why the Jews,” facilitated by Rabbi Douglas Kohn of Temple Emanu-El. On Nov. 2, Andy Millard of the University of Alabama at Birmingham will lead “Attackers: Why the Germans.” Ann Mollengarden of BHEC will lead “Escalation: Why Murder” on Dec. 7, and “Annihilation: Why This Swift and Sweeping” will be led by Mike Gadilhe of John Carroll Catholic High School on Jan. 11.

On Feb. 13, the series continues with “Victims: Why Didn’t More Jews Fight Back More Often?” led by Clark Hultquist of the University of Montevallo. “Homelands: Why Did Survivor Rates Diverge” will be on March 13 with Amy McDonald of Shades Valley High School, “Onlookers: Why Such Limited Help from the Outside” will be led by Janet Wasserman of the University of Alabama on April 3, and the series concludes with “Aftermath: What Legacies, What Lessons” on May 8 with Dominique Linchet, formerly of the Alabama School of Fine Arts.

The 6:30 p.m. sessions will be at the BHEC office, and light snacks will be served. Registration is $100 for the year, or $20 for an individual session on a space-available basis.