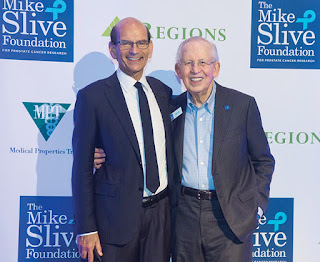 Former Southeastern Conference commissioner Mike Slive, motivated by his own personal journey from diagnosis to remission, wants to help others beat prostate cancer.

Prostate cancer follows only skin cancer as the leading cancer among men and it is the second leading cause of death from cancer in men. Typically occurring in older men, prostate cancer will be diagnosed in approximately 1 of every 7 men.

Despite being one of the most common types of cancer, prostate cancer receives the least funding per new case.

Slive and attorney Ed Meyerson, both involved members of the Birmingham Jewish community, started the foundation earlier this year. Paul Finebaum of the SEC Network emceed the kickoff event.

“They asked me if I would lend my name and support to this effort,” Slive said. “I was honored and flattered. It was something of great importance to me because I went through it and wanted to help others.”

Slive retired in 2015 after serving as SEC commissioner since 2002. He was first diagnosed in 1996 and had his prostate removed. He had treatments in 2001 and 2006 after tests showed elevated PSA levels.

In 2014, after he suffered extreme pain in his abdomen, a tumor was found on is spine, squeezing his spinal cord. He had surgery the next day, then a long protocol of radiation and chemo treatments, along with rods placed in his spine. His cancer is currently in remission and he is living a normal life.

“We want this to be the beginning of the end for prostate cancer. I think we can find a cure,” Slive said. “This foundation will provide research, support and funding to lead us toward this goal.”

Meyerson has been involved in this battle for years. Fifty years ago, his father was diagnosed with an aggressive case of prostate cancer when he was in his 60s. The treatments done then would not be done today, and though he lived into his 90s, his quality of life was greatly diminished.

Meyerson said he reached out to Slive “because I knew that together we could make a contribution to help end prostate cancer. Mike’s story is an inspiration to us all.”

The Mike Slive Foundation for Prostate Cancer Research will focus on education as well as support for both men and the important women in their lives, said Slive. “Men get prostate cancer but it affects the women in our lives so much. They are supporting us and they need more support. Everyone’s lives are disrupted by prostate cancer, not just men.”

Slive recommends that men of a certain age determined by their doctors get a PSA screening. “Prostate cancer is asymptomatic. You may have the symptoms and not feel it. When the pain hits it is already too late,” he said.

The foundation includes a 20-person board and some major sponsors to help spread the word. About half of the board comes from the Jewish community, as well as a large proportion of the initial “Allies in the Fight.”

Meyerson said “those of us who are joining the Mike Slive Foundation are supporting this research so our children and grandchildren won’t have to go through the apprehension and the side effects. They deserve better.”

Slive said since college football is so big in the South, they plan to use that and the conference he formerly led as visibility platforms to plead for more support in the fight against prostate cancer.

“That is a great way for to raise awareness since many of the people we want to reach are football fans,” he said.

Meyerson said “What our doctors do here in Alabama has a global impact on ending prostate cancer for good. More funding is crucial to make the important advancements and discoveries that will save even more lives, and The Foundation was created to ensure the needed funding is secured.”

Slive said he is “healthy, active and feeling great.” When asked if he still travels around regularly to check out SEC athletic events, he said with a smile, “I just watch everything on my 75-inch television at my home here in Birmingham. That’s the best seat in the stadium.”