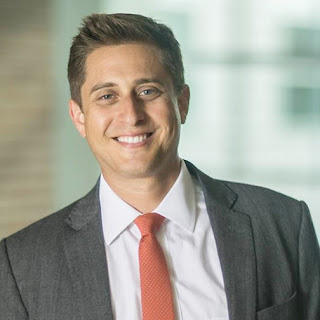 With eight years on the school board, including a stint as president, and 13 years as a criminal defense attorney, “I have insight into some of these areas.”

Bloom is running in District B as one of six candidates in the Oct. 14 election, with Jay Banks, Timothy David Ray, Andre Strumer, Catherine Love and Eugene Ben-Oluwole.

A native of Jacksonville, Fla., Bloom attended a Jewish Day School and summered at Camp Barney Medintz. He was president of his United Synagogue Youth chapter and participated on USY Pilgrimage to Poland and Israel. He was also active in the University of Florida Hillel.

He came to New Orleans in 2000 to attend Loyola University Law School and stayed in New Orleans after graduating, founding Bloom Legal in the Warehouse District in 2004.

He noticed that many native New Orleanians in his peer group had left. “If your father or mother was a doctor in New Orleans and you went off to Duke, UCLA, Spelman, Harvard, why would you go back to New Orleans?”

Katrina changed the “brain drain” and until six months ago, more people were moving to New Orleans than leaving for the last 10 years.

Bloom was first elected to the school board in 2008 and reelected in 2012, declining to run for reelection in 2016.

He partnered with the New Orleans Pro Bono Project to help those unable to afford legal representation, and he was a New Orleans civil sheriff from 2004 to 2010.

He said crime is the highest priority, and the city needs to get “smart” on crime instead of tough on crime. He noted that law enforcement needs more money, but $20,000 per year is spent incarcerating a non-violent offender.

Bloom supports long-term goals, as evidenced by his co-founding of Travis Hill School, which enables kids to get an education while incarcerated.

Quality of life issues are also a major concern, with basic needs like balky drainage pumps, an unreliable water supply and huge potholes to address. When it comes to potholes, “Jefferson Parish spends five times the money we do,” Bloom said. “We need to get this right the first time.”

Fixing crime, education and infrastructure will lead to commercial development, Bloom said. It “will naturally come.” And education, he pointed out, is a long-term solution to crime.

Another area where he has insight is public policy regarding addiction. In August, he opened up about his struggle with opiods, which had resulted in a visit to a treatment facility in 2016. He had been under a physician’s care to deal with two ruptured vertebrae, and was prescribed Percodan and Vicodin.

He became dependent on them to feel normal through the day, and he unsuccessfully tried several times to get off them. Realizing he couldn’t deal with it by himself, he sought help and had a good support system, but many aren’t as fortunate, he said.

“My insight into drug and alcohol addiction gives legitimacy to my position that people with drug and alcohol problems need treatment rather than being imprisoned for decades,” he said, adding that the laws need to catch up with the times. Law enforcement and the courts need to treat the people as patients rather than prisoners, he said.

But on a personal level, he said, with so many other issues facing the city, that’s just a sidebar to his campaign.