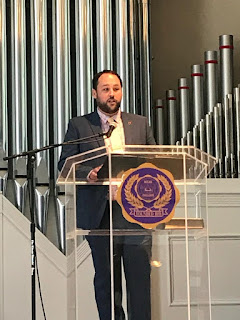 The United States Holocaust Memorial Museum is holding a series of events in the South to discuss parallels between and lessons from the Holocaust and the Jim Crow era.

The first event, “Toward Healing and Reconciliation: Lessons from the Holocaust and the Jim Crow South,” was held at Miles College in Birmingham on Sept. 27.

The series continues on Oct. 10, as the University of South Alabama in Mobile hosts a panel discussion, “Racial Discrimination and Institutionalized Violence in Nazi Germany and the Jim Crow South, 6 p.m. in the Student Center Terrace Room.

A program will be announced for the Montgomery area soon, and on Feb. 22 and 23 there will be a two-day symposium with the University of Alabama at Birmingham Institute for Human Rights. Jake Newsome, campus outreach program officer for the museum, said he hopes to have programs in Mississippi as well.

There are “still many lessons to be learned from these histories and so much more to do,” he said.

Willa Johnson, associate professor of sociology at the University of Mississippi, gave the opening address, “These Responsibilities and These Rights Come From God: The Holocaust, Jim Crow and Msg. Saliege’s Plea to Halt Transports.”

She noted that in 2009, a French court ended France’s reluctance to accept responsibility for “unforced actions” in rounding up Jews during the Holocaust, and that there were 200 camps in France.

She spoke of Cardinal Jules-Geraud Saliege, archibishop of Toulouse, who “stood out among his peers because he did what most of them simply refused to do” in resisting the Nazis.

She read parts of a letter written by a Jew during the height of the persecution, detailing the roundups. In particular, she said a passage that “breaks my heart” refers to “colored troops lording over us.”

Anthonia Adadevoh, chair of the Miles College Division of Humanities, spoke of the historic relations between the African-American and Jewish communities, which “started before they even met,” as slaves who went to church related to the Hebrew Bible stories, and identified with “Go Down Moses.”

In these times, “it is important that we pay attention and build on it,” she said.

Panels through the afternoon spoke about historical understanding and reconciliation, a roundtable discussion on history and education, and a presentation by Miles students who visited the museum in Washington. An information session also promoted education, research and internship opportunities at the museum.

The South Alabama discussion will explore “the involvement of governments and ordinary citizens in systems of targeted oppression and racial violence in Nazi Germany and the Jim Crow South within their specific historical contexts.”

David Meola, the Bert and Fanny Meisler Assistant Professor of History and Jewish Studies at USA, will speak on “Within the ‘Christian State’: Jewish German Lives Under Siege.” Kern Jackson, director of African American Studies and assistant professor of English at USA, will discuss “Without Sanctuary: Lynchings in Alabama History.”

Jake Newsome, campus outreach officer for the USHMM, will discuss “Race and Violence in the Nazi Campaign Against Homosexuality,” and Phil Carr, the Chief Calvin McGhee Professor of Native American Studies and director of the Archaeology Museum at USA, will speak about “Denial of Equal Education to Native Americans.”

Meola said the USHMM is partnering with Southern communities for inter-community discussions on the Holocaust and the Jim Crow South. The event at USA also includes 19th-century Germany and Native American studies, he noted.

On Nov. 1, the museum is hosting “Americans and the Nazi Threat: What Did Georgians Know” in Atlanta, and a similar program about Floridians in Boca Raton on Nov. 29.

The Mobile event is open to the community, and light refreshments will be served.