A Painter’s Hand: The Monotypes of Adolph Gottlieb at the Mobile Museum of Art 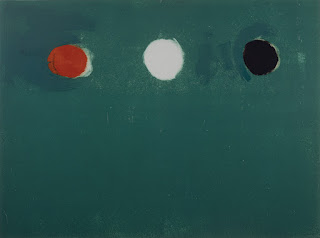 A first-generation Abstract Expressionist, Gottlieb produced the works included in “A Painter’s Hand” after a stroke he suffered left him paralyzed, though he was able to create these monotypes using his still-useful right hand. The exhibit includes 40 of the 54 made in this period just months before his death in 1974. They are striking in their use of color as well as how they relate to his earlier works.

Over his career, Adolph Gottlieb also worked in sculpture, tapestries and stained glass, including 18 stained glass windows installed at the Kingsway Jewish Center in Brooklyn.

“A Painter’s Hand: The Monotypes of Adolph Gottlieb” is organized by the Adolph and Esther Gottlieb Foundation, Inc. and will be on view at the Mobile Museum of Art from Oct. 6 to Jan. 7.