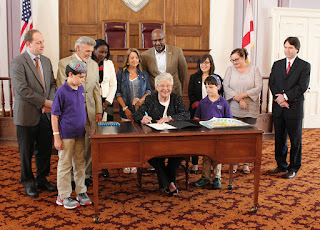 With members of the Alabama-Israel Task Force present, Alabama Governor Kay Ivey signs a proclamation commemorating the 50th anniversary of Jerusalem’s reunification, part of a nationwide celebration on June 7.

One of Israel’s most decorated heroes will be the guest speaker at the Alabama-Israel Leadership Gala in north Alabama on Nov. 18, as Alabama Governor Kay Ivey is presented the Israel Leadership Award.

Brigadier General Gal Hirsch, chairman of the Israel Leadership Institute, commanded the 91st Division of the Israel Defense Forces during the 2006 Lebanon war. Eeki Elner, founder of ILI, will also speak at the event, which is co-hosted by the Alabama-Israel Task Force and ILI.

The gala will honor the friendship between Alabama and Israel. It will be held at The Epicenter in Tanner, just west of the Interstate 65/565 interchange near Decatur.

Hirsch will present the award to Ivey, who is being recognized by AITF “having witnessed first-hand her exceptional work and leadership on behalf of the Alabama-Israel relationship.”

A special presentation will be made to Lior Haiat, Israeli Consul General to Alabama, Mississippi, Florida and Puerto Rico.

John Buhler, who co-chairs AITF, said “this is a unique honor and opportunity as we host several distinguished leaders from Israel for this special gala celebration during the 50th anniversary and Jubilee of the reunification of Jerusalem.”

As Lieutenant Governor and president of the Alabama Senate, Ivey gave “a strong keynote at a statewide gathering,” invited Israel’s Deputy Speaker of the Knesset to address a joint session of the Alabama Legislature, and supported anti-BDS resolutions and legislation. In her brief time as governor since assuming the office earlier this year, she signed a statement against anti-Israel bias and issued a proclamation for the 50th anniversary of Jerusalem’s reunification.

The interfaith AITF was formed four years ago “to provide a bridge and catalyst for broader cooperative efforts and help cultivate an even stronger and expanding state-to-state relationship between Alabama and Israel for the mutual benefit of their people.”

The Alabama group has supported the ILI, one of Israel’s most advanced and creative leadership schools. It is located in Sderot, near the Israel-Gaza border.

In May, the AITF announced it had reached its initial goal to help ILI launch a new Emergency Preparedness Disaster Response training center in Kiryat Shmona, not far from the Lebanon border. According to the task force, the location was chosen after the mayor identified a need for such training, and Kiryat Shmona “is a location similar to Sderot in the south, being a border community and vulnerable to shelling by Hezbollah from Lebanon and Syria.”

Support for the new initiative came from the Jewish and Christian communities in Alabama, with special contributions from Calvary Assembly in Decatur and Rock Family Worship Center in Huntsville, which hosts events honoring Israel each year.

In the 1980s Hirsch was a paratrooper in the Paratrooper Brigade, leading a battalion in South Lebanon and through the First Intifada. He was severely injured in a terror attack as a large rock was thrown onto his car.

He commanded the Benjamin Regional Brigade during the Second Intifada and served in the central command during Operation Defensive Shield. After the 2006 war, he resigned from the military and founded Defensive Shield Holdings. He has also been a research associate since 2008 at the International Institute for Counter-Terrorism in Herzliya.

Tickets to the 7 p.m. event are $100, with proceeds supporting the AITF’s Emergency Preparedness and Disaster Response Initiative with ILI in Sderot. There will be a reception with kosher heavy hors d’oeuvres and desserts. There will also be personal photo opportunities with the Israeli dignitaries starting at 6 p.m. Details are available here.