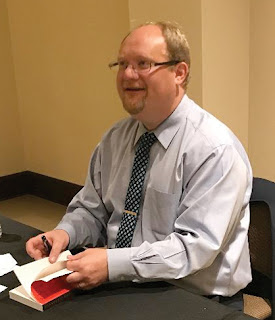 For the next several months, “Violins of Hope” will be a recurring presence in Birmingham.

The project involving restored violins that had been played in the Holocaust kicked off its Birmingham activities on Sept. 17 with author James Grymes, who wrote a book about the instruments and their stories. A full house attended the talk at Temple Emanu-El.

The violins are a project of Amnon Weinstein, a violin maker in Israel, who has been restoring violins from the Holocaust since 1996. He has restored more than 60, and his intent is that they be played rather than just being displayed.

As part of that mission, the Alabama Symphony will have a concert with the violins on April 14 at the Alys Stephens Center.

Kay Donnellan said she was watching a “60 Minutes” segment on the violins a year and a half ago. After the segment, her husband, Bruce, “looked at me and said, ‘you’re involved with the Symphony. These violins need to come to Birmingham’.”

She started reaching out to others, and found that Sallie Downs “was 10 steps ahead of me,” had already called Weinstein and “had a plane ticket to meet with him.”

Downs said she called Weinstein to tell him the violins need to come to Birmingham. “He said ‘when?’ I said, ‘now.”

Donnellan said Weinstein “was drawn to Birmingham and felt it was one of the best places for the violins to be heard” because of the civil rights history.

Weinstein clearly knew about Birmingham, Downs said, because when she got to his studio, the first thing he said was “did you know Condi Rice plays concert piano?” Rice, the former U.S. secretary of state, is a Birmingham native.

Downs said the organizers are reaching out to a wide range of organizations, and there will be numerous other events and activities in connection with the violins’ visit.

The violins will be displayed from April 10 to 15, and there will be educational programs, lectures and exhibits.

Hightower had worked with Christa Lidikay at JH Israel, a Birmingham-based group supporting Israel, and Lidikay told her about this initiative. She said it was a natural to be involved and connect her two passions — music and Israel.

Jeffrey Bayer, who was honored by Birmingham Holocaust Education Center three years ago, remembers talking about the “still-ongoing atrocities of humanity” and spoke about efforts to “reduce intolerance, foster an attitude of live and let live.”

He said his family is looking to build a long-term effort locally to “provide a sustainable platform for dialogue” and “build bridges of collaboration and understanding. Who knows, it may become a model for other communities to emulate.”

Rev. Rich Webster of St. Luke’s Episcopal Church said “we need to keep doing this work” and “find new ways for us to be one Birmingham, one people, one city respecting the dignity of every human being.”

Grymes, a professor at the University of North Carolina in Charlotte, said he was an unlikely candidate for chronicling this story, as he is “not Jewish and can’t play a lick of violin.” He also “didn’t know a whole lot about the Holocaust.”

In 2012, UNCC hosted the first event for the violins in the Western Hemisphere, and as a faculty member, he was involved in the planning.

“As a musician and a music historian, I was inspired,” he said. He went to Tel Aviv and met Weinstein and stayed a week at his workshop. During that visit, he was inspired to write “Violins of Hope: Instruments of Hope and Liberation in Mankind’s Darkest Hour,” which won the 2014 National Jewish Book Award in the Holocaust category.

He focused on the short stories of each violin’s history, but wondered how to tie the stories together. “Amnon is the spirit that holds this project together,” he said.

Weinstein’s parents moved to pre-state Israel from Lithuania in 1938, the only part of his family to leave Europe. After 1941, all communication from the rest of the family ceased. They later found out that all 400 family members were gone.

The night after hearing the news, Weinstein’s father had a heart attack. He survived, but never spoke about the family’s tragedy again.

Weinstein went to Italy to learn old-world violin craftsmanship, and took over the family business when his father died in 1986. But the Holocaust continued to haunt him, and he turned away violins from the Holocaust.

Weinstein and his son will be in Birmingham for the April events.

Grymes presented a couple of violin stories, such as Feivel Wininger, who survived a death march in Romania. A former judge who knew him gave him his violin, and Wininger promised to assist him. He played at parties and was able to take the leftovers home. Through the violin he was able to sustain his family and 13 other family members. The first time he played, he tried to bring some food to the starving judge, only to find that the judge and his sisters had committed suicide two days earlier.

He often told his daughter how the violin had saved their lives. When he was turning 90, his daughter asked him what he wanted for his birthday, and his only wish was to have the violin restored so he could play it once more. The daughter, who was in the Israeli military at the time, asked around and was referred to Weinstein, who told her that the violin wasn’t worth saving.

After she told him the story, he meticulously restored it, and Wininger had his wish. While he was unable physically to play it, having his old friend there brought out the brightest smile of his life.

Another violin played a key role in the survival of Motele Schlein. Just before getting home as a boy, he noticed Nazis at his house. He hid until they left, and found his parents and sister had been murdered. He escaped with his violin and joined “Uncle Misha’s Jewish Group” of partisans.

Hiding his identity and armed with a violin, the 12-year-old became a favorite musician of Nazi soldiers. They gave him a German outfit, which he wore to his performances at an officer’s club. He would channel information that he overheard to his group, which fed it to the Red Army.

After performing, he would eat in the cellar. One day he discovered a huge crack in the building, in a neglected storeroom. He started leaving his violin there each night, taking the empty case with him, and returning with explosives in the case. He continued packing the explosives in the gap, then one night after he finished playing, he told the chef he wasn’t hungry and was heading out. Instead, he set a detonator and left. Before long, a loud explosion rocked the town as he slipped into the forest, having avenged his family.

“Each violin tells its own story,” Grymes said.

Ann Mollengarden of the BHEC said she has read a lot of books about the Holocaust, “but with this book I saw something different,” a different approach to Holocaust education that can draw a new audience.

On Sept. 18, the BHEC held a teacher workshop focused on using this book in the classroom.

Grymes said the Birmingham organizers are “doing a wonderful job of coming together early and making sure everyone understands what the project entails, and the significance of these instruments coming to Birmingham.”

When the violins came to Charlotte, “when people started to understand what it is, it was over.”

He added, “even after the violins leave Birmingham, the legacy of the project will continue to resonate throughout the city.”