Rabbi Gerber to succeed Rabbi Loewy at Gates of Prayer 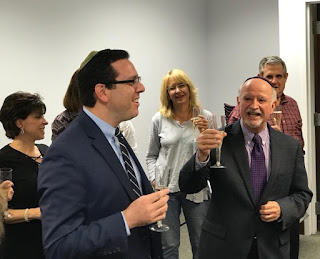 Rabbi Robert Loewy of Gates of Prayer in Metairie toasts his newly-selected successor, Rabbi David Gerber, at the congregation’s board meeting on Oct. 17.

The Gates of Prayer board affirmed the search committee’s recommendation by unanimous vote on Oct. 17.

David Dulitz, president of Gates of Prayer, said “Gerber is more than ready to take the reins of his own pulpit, and ‘Don’t let him get away’ was a phrase we heard repeatedly from those who know him well.”

Gerber said he has visited to New Orleans several times and the city has always been of interest to his family.

His contract at Beth Or was coming up next summer, and though they were allowing him to continue on a year to year basis after that, he started looking to see if there was a good match out there. He decided to look during the summer, since he “didn’t want to distract from my responsibilities” at Beth Or during the year.

As he looked to embark on the next chapter of his rabbinate, they wanted to be “in a community that has heart and character, civic pride” and be a place “we’d really like to raise our kids, and New Orleans appealed to us.”

From the early interviews, “things really clicked” and the process went quickly. In rabbinic searches, he said, for both the rabbi and the congregation, “it’s really all about how it feels, and this felt right.”

Gerber grew up in Saint Louis, and described himself as the stereotypical kid who has his Bar Mitzvah and never shows up again, choosing “baseball and karate.” He attended Indiana University, which has a lot of Jewish students but also a lot of students who had never met a Jew before, and they were filled with questions.

“I got tired of not knowing the answers,” he said, and began to look online. Google wasn’t omnipresent yet, so he would look on Ask Jeeves. “My first rabbinic mentor was probably Jeeves,” he said.

Gerber bought a Tanach, “started reading and never put it down.” When he went to services for the first time in college, “I hadn’t been to a synagogue in eight years.”

It wasn’t long before he decided to pursue the rabbinate, but rabbinical school admissions are competitive, and with a degree in telecommunications and having been away from Jewish study for so many years, “I did not have the resume to get in.”

He got a job as a financial advisor in St. Louis, “knowing it was temporary,” and after hours he would teach Hebrew School and take classes at Washington University.

In 2007, he entered Hebrew Union College-Jewish Institute of Religion in Cincinnati, hometown of his wife, Lauren. They now have two daughters, ages 4 years and 20 months.

In 2009 Gerber was assistant director at Camp Sabra in Missouri, and had student positions in Kokomo, Ind., Cincinnati and St. Louis. At HUC, he was president of the senior class, and president of the Rabbinical Student Association. He was also student representative for the HUC New Way Forward strategic planning initiative.

While he “cannot say enough about how excited I am” about moving to Metairie, it is “bittersweet” to have to leave “the community that has taught me how to be a rabbi” and where their daughters were born.

Gerber and Loewy have already started discussing the transition, and Gerber said “It’s not a matter of filling his shoes, it’s a matter of continuing his successes.”

Gerber noted that Gates of Prayer historically has rabbis with long tenures, and the longevity “is a testament to how the congregation treats their rabbis.”

Gerber looks forward to building relationships in the congregation, in the Jewish community and the interfaith community. “Everything is exciting” about the move, he said.

Having grown up in a “y’all community,” he had to adjust to “youse” in Pennsylvania. “We’re looking forward to getting back to a y’all kind of community,” he said.