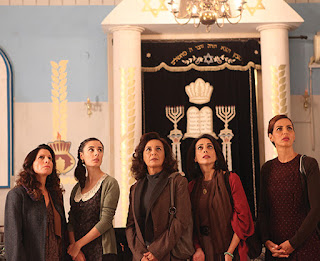 The Baton Rouge Jewish Film Festival will open on Jan. 10 at 7 p.m. at the Manship Theatre with “The Women’s Balcony,” an Israeli dramedy that starts with the collapse of a women’s balcony at a synagogue during a Bar Mitzvah. The overwhelmed older rabbi and a younger rabbi clash as husbands and wives are caught in between the battle lines.

On Jan. 11 at 7:30 p.m., “Keep the Change” is a romantic comedy with a man who has autism and finds it difficult to accept that being different isn’t a hindrance to his budding romance. The film won best narrative feature at the Tribeca Film Festival.

“Denial” is the Jan. 13 feature, screening at 7:30 p.m. The legal drama is about the libel trial that David Irving brought against Emory Professor Deborah Lipstadt, who called Irving a Holocaust denier in her groundbreaking book on the subject. But Irving sued in British court, where libel laws are different — meaning the writer has to prove what she wrote was true, and by extension, the Holocaust was being put on trial.

The festival ends on Jan. 14 at 3 p.m. with “Norman: The Moderate Rise and Tragic Fall of a New York Fixer,” with Richard Gere as the title character.

Jewish Cinema Mississippi will open on Jan. 23 at the Malco Grandview Theatre in Madison, with all films at 7 p.m., except the final matinee on Jan. 28. The festival is sponsored by Beth Israel in Jackson and the Jewish Culture Organization at Millsaps College.

The opening film is “Riphagen: The Untouchable,” a Dutch film about the manhunt for a Nazi collaborator and fervent hunter of Jews in hiding during the Holocaust.

On Jan. 24, “1945” portrays two Orthodox Jews arriving at a village train station with boxes that say “fragrances” — but villagers fear they really came to reclaim property stolen from Jews during the war, and that many others will follow. The Hungarian film explores how non-Jewish former neighbors profited from the deportation of the Jewish community, and how a society fails.

“The Testament” on Jan. 25 explores a man’s double investigation — to find secrets of his mother’s past, as she was a Holocaust survivor, and to prove the connection between an influential Austrian family and a massacre of Jews. He seeks the truth despite villagers’ denials and his mother’s silence.

The festival concludes at 2 p.m. on Jan. 28 with “On The Map,” the against-all-odds 1977 European Basketball Championship for Maccabi Tel Aviv, a massive lift for a nation still reeling from the 1972 massacre at the Munich Olympics, the 1973 Yom Kippur War and the traumatic 1976 hijacking of an Air France flight to Tel Aviv.

The Jewish Federation of Central Alabama also announced its lineup for Cinema Israel, with a wide range of genres. On Jan. 21, “A Borrowed Identity” will screen at Temple Beth Or. “The Wedding Plan” will be Feb. 4 at Agudath Israel-Etz Ahayem. “The Women’s Balcony” will be on March 11 at Temple Beth Or, followed by “Above and Beyond” on May 6 at Beth Or, and finishing with “Bethlehem” on June 10 at Agudath Israel-Etz Ahayem. All of the films will be at 3:30 p.m.