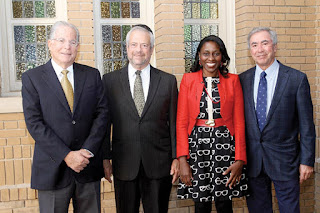 Mayor-elect Randall Woodfin was a featured guest at the annual Birmingham Jewish community awards event on Oct. 29 at Temple Emanu-El.

Hilary Gewant, president of the Federation, said many families in the Jewish community “have benefitted our city for decades… Not only are we citizens of Greater Birmingham, but we are also members of the Jewish Diaspora. We think locally and globally.”

General Charles Krulak introduced Woodfin, speaking about how a leader has to be a person of character, selfless and with moral courage. Krulak is co-chair of Woodfin’s transition team.

Despite a severe case of laryngitis, Woodfin thanked the honorees for their service to the community. While there will be a change at City Hall, it will not be “change for change’s sake,” it will be about making progress that “allows us all to participate.” He wants City Hall to be “a welcoming place to all of Birmingham’s stakeholders.”

He wants to be sure city spending is aligned with the priorities of education, economic development and entrepreneurship, with transparency.

Jimmy Filler, long-time Bonds chair in Birmingham, introduced Miller, saying when Miller arrived in 1991 he expected to be here perhaps five years, but it turned into 27.

Filler praised him for his interfaith outreach, saying “Nowhere and no one else could someone have created so much harmony outside of their own religious faith.”

Miller said it was an honor to be back on the pulpit he led for 27 years. “This is my pulpit and I’m a visitor at the same time.” He remarked that after he arrived, his first public event was with Rabbi Reuven Tradburks of Knesseth Israel, Rabbi Steve Glazer of Temple Beth-El and Federation Executive Director Richard Friedman at a prayer vigil as Iraqi Scud missiles were raining down on Israel. “It seems like yesterday.”

After the many years of struggle, Israel’s success “only comes from our commitment to Israel and its commitment to the Jewish people,” he said.

In his Bonds remarks, Filler said that Israel remains “the only homeland of the Jewish people. If a Jew is turned away anywhere in the world, they have Israel to turn to, and that must never go away.”

In an age when many are looking for ways to distance themselves from Israel, “we can never not do our part because we don’t agree with some political issue,” he said. “Sure, we have problems in Israel. We have a lot of problems in this country. That is what a democracy is all about.”

Filler said the Rabbi Milton Grafman Endowment Fund at Emanu-El was purchasing $100,000 in Israel Bonds, and the State of Alabama had a $2 million purchase. Filler called it a “direct repudiation” of the “economic terrorism” of the boycott-Israel movement.

When he called her to let her know about the honor, she was speechless, he said, “then emotional and very humble.”

Friedman told her “we are probably the only Jewish Federation in America that will have given our Young Leadership award to a woman born in Uganda, who was raised as a Muslim, and who converted to Christianity.”

He figured Bayer would “be fascinated” to learn about Berns’ story, and how she is an active member of the Federation board. “Joanie, that’s innovation,” Friedman commented.

Berns’ father was an Israeli-trained military leader in Uganda who helped overthrow Idi Amin, but was assassinated when Berns was 7 years old.

Berns converted from Islam to Christianity, attended law school and moved to London. After arriving in Alabama, she became a paralegal at Sirote and Permutt, then inspired by the late Morris Sirote’s story, finished law school and became an attorney.

She said “the deep gratitude I feel for the Jewish people’s contribution to mankind keeps growing as the years roll by.”

Through the Federation, she works closely with Operation Lifeshield, which provides bomb shelters to vulnerable communities near Israel’s borders. “They help Christians, Arabs, Jews… there is no discrimination,” she said.

During her visits to Israel, she saw Israelis who have been going into Syria to bring wounded Syrians into Israel for treatment. Her 2016 participation on a Federation trip “brought reality to me in a way nothing else had.”

In a world of religious conflict, she remembered being in Jerusalem at “a place that is so sacred to Jews and Christians,” and yet, there was also the Islamic call to prayer.

“I am grateful to the Birmingham Federation and Foundation, and all my Jewish friends for all they’ve taught me, and the opportunities they’ve given me to grow and take my passion for Israel to new heights,” she said.

Held recently completed a two-year term as Federation president, after serving two additional years as co-president with his wife, Ginger, who was the first recipient of the award 12 years ago.

Held’s children, Layne Held, Elisa Nelson and Brian Held, presented the award, noting their parents’ special relationship with Susan Goldberg and her husband, Edward Goldberg, and committing to “do our best to follow your footsteps.”

Held said it was particularly special to receive the award named for Susan Goldberg on the night when Edward Goldberg would be receiving the N.E. Miles Lifetime Achievement Award.

Held spoke about today’s “completely different landscape for our religious institutions” and the Reimagining Jewish Birmingham process currently underway, “to discuss what we can do to better serve the Jewish community for generations to come.”

He urged the community to “be passionate about our future be patient as options are discussed, and participate.”

Ginger Held presented Edward Goldberg with his award, saying he “may not have been born here, but he represents the best of our community. We are incredibly fortunate that this is where he and Susan, of blessed memory, decided to call home, raise their children, and build his business.”

She said “ensuring the Jewish future is something that is always on your mind.”

Goldberg said that when growing up, “we knew it was always important to give.” Susan’s family, he said, “taught her not only to give tzedakah, but involve yourself” in a cause.

He spoke of those like N.E. Miles, who “paved the way for many worthwhile programs we have today” and said “it’s time for us to pay our Jewish tax… Our community needs your help. Commit to an organization that touches you.”

He finished with a plug for endowing annual campaign gifts through the Birmingham Jewish Foundation.