Merrick, Roger to be honored by ADL in New Orleans 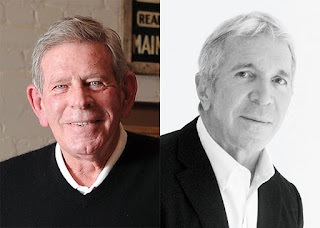 The Anti-Defamation League South-Central region, based in New Orleans, announced that Robert Merrick and Arthur Roger will be this year’s honorees at the A.I. Botnick Torch of Liberty Award Dinner.

“Award recipients are people who care not just about themselves today but about the children and grandchildren of tomorrow,” says Michael Botnick, former ADL regional board chair and selection committee member. “They care about the greater good and translate that caring into action, they strive to build a brighter future in which all people share the fruits of democracy.”

“Robert Merrick and Arthur Roger are powerful leaders, who have huge footprints in our community,” said Jonathan Lake, ADL South-Central regional board chair. “Their steadfast dedication to equal access and LGBTQ rights have made New Orleans a better place for everyone, and their leadership keeps New Orleans as a cutting-edge city and pace-setter on many civil rights issues.”

The award will be presented at the annual A.I. Botnick Torch of Liberty Award Dinner at the Hyatt Regency on Dec. 5. Merrick’s dinner chairs are Joseph Exnicios, Richard “Rick” Hasse, Alan and Sherry Leventhal, and Hardy Fowler. Roger’s dinner chairs are Timothy Francis, Jack Sullivan and Marc Behar. Tickets are available here or by contacting the local ADL office at (504) 780-5602.

The New Orleans ADL office covers a territory including Louisiana, Mississippi and Arkansas.

Merrick formed his own company in 1973 and then, in 1986, purchased Latter & Blum, Inc./Realtors, one of the largest and oldest full-service real estate companies in Louisiana. After this initial acquisition, he acquired numerous brokerage firms and incorporated a mortgage firm, a title company and insurance agency.

In 2015, Merrick was awarded the Lifetime Achievement Award by Junior Achievement of Greater New Orleans. In the same year, he was honored as the Distinguished Citizen of the Year by the Southeast Louisiana Council of the Boy Scouts and as the New Orleanian of the Year by Gambit Magazine.

In 2014, he became the first Louisianan to join the United Way Million Dollar Roundtable, a national membership reserved for million-dollar donors. In 2005, the American Red Cross named him the Humanitarian of the Year.

Merrick has served as the campaign manager for the United Way of Southeast Louisiana and the March of Dimes. He has served on Business School advisory boards at the University of New Orleans and University of Louisiana at Lafayette, and as a board member for the Ruth U. Fertel Foundation, Boy Scouts of America, Salvation Army, and WYES-TV, among others.

Merrick is also committed to the higher education of his employees’ and associates’ children, granting 15 scholarships each year. This scholarship fund has now granted over $500,000 to these young adults.

“Bob is truly a visionary leader, who has helped Louisiana grow. His example inspires us to do the same,” said ADL Interim Regional Director Lindsay Baach Friedmann.

Roger is the owner and director of the Arthur Roger Gallery, located in the Arts District of New Orleans. A native of New Orleans, Roger worked in art galleries in the French Quarter while attending high school and college. In 1978, he opened his gallery on Magazine Street, establishing a national and local reputation as the director of a leading New Orleans art gallery and for his efforts supporting emerging female artists, African-American artists and artists from the LGBTQ community.

In 1988, Roger moved the gallery to its current home on Julia Street. After Hurricane Katrina, Roger played a pivotal role in the revival of the visual arts scene in New Orleans and now has a second studio — Arthur Roger@434 near his Julia Street gallery.

Roger has served on numerous boards and commissions, including the Greater New Orleans Foundation, Contemporary Arts Center, Louisiana Children’s Museum, The Ogden Museum of Southern Art, and The Mayor’s Arts Commission, and as an officer in the New Orleans Arts District Association. He originated Arts Against AIDS, benefitting NOAIDS Task Force, and played a leading role in Halloween in New Orleans, the principal fundraising event for Project Lazarus.

In 1995, Roger received the Paul Plauche Award for fundraising. Among other honors, Roger received the Young Leadership Award in 1994, the Junior Achievement Role Model in 2009, and the Human Rights Campaign’s Equality Award in 2016. This year, he donated paintings, drawings, photographs and sculptures from his personal collection to the New Orleans Museum of Art, which are currently on display in the Museum’s exhibition “Pride of Place: The Making of Contemporary Art in New Orleans.”