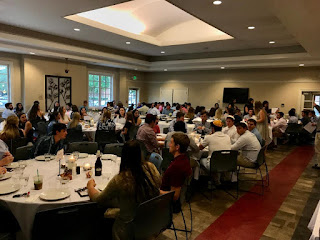 When the Bloom Hillel building at the University of Alabama opened in 2011 in what is known as the campus “God Quad,” there was great excitement and plans to serve a growing Jewish student population.

There has been so much growth that now, the Hillel is already badly in need of an expansion, and is embarking on a fundraising campaign to match a large gift by the end of the year.

Eliza and Hugh Culverhouse have issued the challenge, matching up to $100,000 in donations that Hillel raises for the building fund by Dec. 31.
Hillel Director Lisa Besnoy said the Culverhouses “have been wonderful friends of Hillel for many years” and “have provided a number of challenge grants that have helped launch our annual campaigns and student-led fundraisers.”

Besnoy said “Our success at building programming and participation has resulted in the need to expand our physical space to meet the needs of our students.”

“We’ve almost tripled our student attendance” since 2011, Besnoy said. Many meals and programs completely fill the building, which is also used as a seating area for the Jewish Food Festival hosted by neighboring Temple Emanu-El. “We reach building capacity each week as we provide a home for our students during their college journey.”

The Hillel expansion would add about 1,200 square feet to the existing 1,600-square-foot multipurpose room, plus additional storage, a conference room and a director’s office, and a new outdoor basketball court. The bathrooms would also be expanded. The current building, aside from the multipurpose room, kitchen and bathrooms, has only a staff room and small lobbies on two sides.

The overall campaign will be around $700,000, and Besnoy said a groundbreaking is anticipated for February, with the hope that the expansion will be done in August for the Fall 2018 semester.