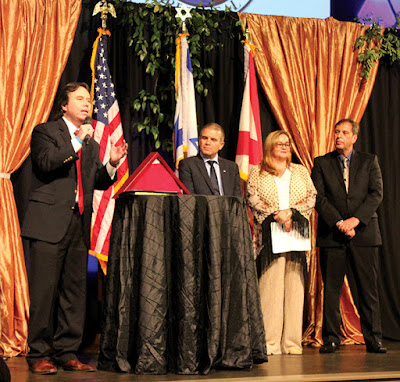 Heavy rain may have changed the program somewhat at the Alabama-Israel Leadership Gala on Nov. 18, but it did not dampen the spirits of the 200 who were at the event at The Epicenter near Decatur.

A strong line of storms came through the state as the event began, knocking out power briefly. Alabama Governor Kay Ivey was the evening’s honoree, but because of the storms, Ivey’s pilot cancelled her trip, a decision that Alabama-Israel Task Force Co-Chair John Buhler praised, saying her safety obviously comes first.

As there was no time to set up a video link, the presentation to her was filmed for her to view later, and it was announced that a response from Ivey would be forthcoming and would be sent to everyone in attendance.

Buhler said Ivey was chosen by the Task Force for the honor for “her exceptional work on behalf of the Alabama-Israel relationship.”

As lieutenant governor, he said, Ivey gave the keynote at the first AITF gala, on the 70th anniversary of the 1943 Alabama Legislature resolution calling for the creation of a Jewish homeland, the first such declaration passed in the United States. She also led the push for legislation against the anti-Israel Boycott, Divest and Sanctions movement, and last year invited Hilik Bar, deputy speaker of the Knesset, to address a joint session of the Alabama Legislature.

“We are deeply grateful for your leadership, for your support for this historic state to state relationship,” Buhler said.

Eeki Elner, founder of the Israel Leadership Institute, invited Ivey to visit Israel and see the Institute’s work “and to be sure our ties are stronger.”

Buhler said the evening was to “honor leadership, celebrate friendship and celebrate the state to state relationship” between Alabama and Israel, and ask “how can we help shape the future together.”

In his invocation, Pastor Rusty Nelson of Rock Family Worship Center — which holds a big Israel celebration each year — said “it is so humbling that we get to live in these days, to embrace the Jewish people.”

Huntsville’s two Jewish congregations, Etz Chayim and Temple B’nai Sholom, each had tables at the event.

Among those in attendance were U.S. Rep. Mo Brooks and Republican U.S. Senate Candidate Roy Moore, who were both introduced at the end of the evening.

Task Force Co-Chair Laura King, past president of the Jewish Federation of Huntsville and North Alabama, presented a plaque with the text of the 1943 resolution to Lior Haiat, Israel’s Consul General in Miami.

Haiat thanked the crowd for “representing Israel in Alabama all the time” and called the evening “a symbol of how important the connection is between Israel and Alabama.”

He said the 1943 resolution was an important declaration of “international legitimacy for the Jewish people to go back to their homeland and have a sovereign state.”

To that, Haiat added next year’s 75th anniversary of the Alabama resolution, which “no one in Israel could have dreamt” at the time.
One more historic event which may come soon, he added, is the U.S. embassy moving to Jerusalem, which “we will obviously support.” He then commented, “I will add, not in a very diplomatic way, it’s about time.”

But, he said, Israel does not need a diplomatic gesture “to know where our capital is.”

The evening was a benefit for the Task Force’s work with the Israel Leadership Institute in Sderot. Founder Eeki Elner spoke about the need for leadership as “the key to the future.”

He started the Institute 10 years ago, and five years ago was introduced to King, who asked him to come to Alabama and raise awareness of the Institute’s work.

Support from the Alabama group allowed the Institute to open a new leadership training course in northern Israel, in Kiryat Shmona. A video presentation was played, with participants thanking the Alabamians for their help in making the program happen.

The evening’s keynote speaker was Brigadier General Gal Hirsch, who chairs the Institute’s board.

Hirsch, who lives in Rosh Ha’Ayin, spoke of Israel as not only the historic Jerusalem but Beersheva, “the cyber capital of the world.”

Hirsch grew up in Arad. He said his Bar Mitzvah turned out not to be a day of celebration, because a cousin was killed that night.

He committed himself to Israel’s military, in which serving is seen not as a career choice but as a “mission.”

In the 1980s Hirsch was a paratrooper in the Paratrooper Brigade, leading a battalion in South Lebanon and through the First Intifada. He was severely injured in a terror attack as a large rock was thrown onto his car.

He commanded the Benjamin Regional Brigade during the Second Intifada and served in the central command during Operation Defensive Shield. After the 2006 war, he resigned from the military and founded Defensive Shield Holdings. He has also been a research associate since 2008 at the International Institute for Counter-Terrorism in Herzliya.

After the terror attack, he battled with the doctors to return to his post. “My body is full of titanium,” he said. “I am one of the most expensive officers in Israel,” and even today is considered 59 percent disabled. “You cannot see that. I am a good actor.”

But Israel is not about war, he noted. “Israel holds a rifle in one hand and a branch of olives in the other.”

Today, though, “we are totally surrounded by jihadists,” with “terror armies made, financed and aided by Iran.” In the north, Hezbollah is an Iranian army, Iran is trying to build a permanent base in Syria, Iran supports Hamas to the south, and while Sinai is technically part of Egypt, many parts are “in reality unguarded,” with ISIS in control.

Those who argue the world can live with a nuclear Iran, Hirsch said, should look at North Korea.

Hirsch was presented with an Alabama flag that was signed by everyone in attendance that evening.