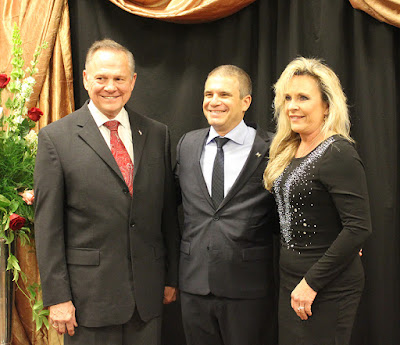 On a national Christian radio show, Roy Moore, who is the Republican nominee for U.S. Senate in Alabama, suggested that George Soros is going to wind up in hell, “the same place that people who don’t recognize God and morality and accept his salvation are going.”

Soros, a billionaire Jewish philanthropist and Hungarian-born Holocaust survivor, is a favorite target of the right because of his support of far-left causes.

Bryan Fischer, host of Focal Point, “the home of muscular Christianity” on American Family Radio from Tupelo, asked Moore about Soros in the context of an effort to register felons in Alabama to vote.

Fischer said Soros apparently “seems to think that if you register felons to vote, they will vote for the Democrat.”

In May, Alabama Governor Kay Ivey, a Republican, signed the Definition of Moral Turpitude Act, a law that stated voting rights are denied to felons who have committed a crime of “moral turpitude,” with about 50 specific examples given. Now that the definition has been clarified by the mostly-Republican Legislature, felons whose crimes do not fall under those categories are allowed to register and vote.

However, the state declined to notify the affected felons about their new voting status, and a federal judge confirmed that Alabama was not under any obligation to do so.

Enter groups like the Dothan-based Ordinary People Society, founded by Pastor Kenneth Glasgow in 1999 to assist “individuals and their families who suffer the effects of drug addiction, mass-incarceration, homelessness, poverty, unemployment, hunger and illness — without regard to race, sex, creed, color, religion or social status.”

The day before Fischer’s interview, Fox News had a piece stating Democrats were trying to register felons, and on Dec. 3 Breitbart ran a piece headlined “Soros Army in Alabama to Register Convicted Felons to Vote Against Roy Moore.” The piece, by Breitbart Jerusalem bureau chief Aaron Klein, stated that Glasgow’s group has worked with other left-wing groups that are funded by Soros, though the piece never explicitly states that Soros funds the Ordinary People Society, which he does not.

Moore discounted the idea that felons would all be Democrats, saying “I don’t know what registered felons would do… It varies with the crimes and with the people involved.” However, he stated “Soros is certainly trying to alter the voting populace, and that’s true.”

Moore added that Soros “is pushing an agenda and his agenda is sexual in nature, his agenda is liberal, and not what Americans need. It’s not our American culture. Soros comes from another world that I don’t identify with.”

Moore continued, “I wish I could face him directly, I’d tell him the same thing. No matter how much money he’s got, he’s still going to the same place that people who don’t recognize God and morality and accept his salvation are going. And that’s not a good place.”

Fischer then moved on to Trump and his stated support of Moore.

Rabbi Jack Moline, president of Interfaith Alliance in Washington, called on Moore to apologize for his comments, which the alliance said played on anti-Semitic themes and implied that George Soros’ status as an immigrant put him outside “our American culture.”

“Moore owes George Soros and the entire Jewish community an apology for comments he made that are clearly anti-Semitic,” Moline said. “Moore is playing on well-known anti-Semitic tropes in which Jews are cast as outsiders using their money for evil intent. These comments have no place in public discourse… No candidate for office should appeal to latent bigotry when asking for support.”

The Reagan Battalion online news source tweeted Moore’s comments, saying that while they “despise” Soros, Moore’s comments are “straight up antisemitism.”
Moore campaign strategist Brett Doster told al.com, “Judge Moore did not utter any anti-Semitic comments. He uttered anti-George Soros comments, and for that, there is no need for any apology.”

Fischer is known for his extreme views on homosexuality and other issues.

After founding a church in Idaho, he started the Keep the Commandments Coalition to preserve a Ten Commandments monument in Boise, which voters overwhelmingly voted to remove. In 2009 he joined the American Family Association.

In 2010, Fischer’s comments about homosexuality got AFA listed as an anti-gay hate group by the Southern Poverty Law Center.

Fischer has blamed the Holocaust on homosexuality. “Homosexuality gave us Adolph Hitler, and homosexuals in the military gave us the Brown Shirts, the Nazi war machine and six million dead Jews,” he said.

In 2015, the AFA repudiated Fischer’s comments two days before an AFA-led trip to Israel for Congressional Republicans began. Among the repudiated comments were that the First Amendment free exercise of religion applies only to Christians as “we are a Christian nation and not a Jewish or Muslim one,” that Muslims should not be allowed to build mosques in the United States, that the expulsion of Native Americans was divinely ordained for “superstition, savagery and sexual immorality,” that Hispanic immigration should end because they are socialist by nature and want to plunder U.S. wealth, that minorities “rut like rabbits,” that U.S. immigration policy should model Ancient Israel and require all immigrants to convert to Christianity, that homosexuality should be illegal and “underground railroads” set up to protect “innocent children from same-sex households.”

While the AFA said Fischer would no longer be a spokesperson, he retained his radio show.

Richard Cohen of the SPLC said the repudiation seemed more like “an effort to quell the negative press attention” before the Israel trip, and called it a “shell game.”

While Jews in Alabama tend more conservative than elsewhere in the country, open support for Moore in the state’s Jewish community has been rare.

There have been rabbis from New York at a couple of Moore’s rallies over the years. On Nov. 16, Rabbi Noson Shmuel Leiter, who heads Torah Jews for Decency and is executive director of Help Rescue Our Children, praised Moore for standing up against “homosexualist gay terrorism of blackmail.”

In 2003, Rabbi Yehuda Levin spoke at a rally when Moore was Chief Justice of the Alabama Supreme Court and was defying a court order to remove his 5,280-pound granite monument of the Ten Commandments from the state Supreme Court building.

Both Leiter and Levin were widely condemned for stating that Hurricane Sandy’s devastation in New York was a divine warning after the legalization of same-sex marriage in the state.

When arguing against the 2015 Supreme Court decision permitting same-sex marriage, Moore compared complying with that order to German officers perpetrating the Holocaust by “following the orders of the highest authority to kill Jews.”

In October, Salon reported that in 2005, Moore’s Foundation for Moral Law received $1,000 from the Foundation to Defend the First Amendment, which was founded by Willis Carto. Carto, who is regarded as a Nazi, founded the Liberty Lobby, the Populist Party that ran candidates like Klan wizard David Duke for president, and the Institute for Historical Review, the largest Holocaust denial organization in the country.

Most of the other donations by Carto’s group went to organizations that engage in Holocaust denial. There are no reports of the donation to Moore’s group ever being returned.

Moore also has argued that the First Amendment protection on freedom of religion was written in a Christian context, and as such does not apply to other faiths. “Buddha didn’t create us, Mohammed didn’t create us, it was the God of the Holy Scriptures on which this nation was founded,” he said.

When Keith Ellison was elected to Congress from Minnesota in 2006, Moore stated that Ellison should not be allowed to serve, since Ellison is a practicing Muslim and has an “apparent determination to embrace the Quran and an Islamic philosophy directly contrary to the principles of the Constitution.” He compared Ellison’s use of a Koran, once owned by Thomas Jefferson, for his swearing-in ceremony to swearing on a copy of Mein Kampf” in 1943 or the “Communist Manifesto” in the 1950s.

In 2003, when Moore was speaking at churches statewide regarding the controversy over his refusal to follow a court order to remove a Ten Commandments monument from the Alabama Supreme Court building, Rabbi Jonathan Miller of Birmingham’s Temple Emanu-El, a Reform congregation that is the state’s largest synagogue, invited Moore to speak to the Jewish community, off the record. Moore declined, stating he was too busy, Miller said.

Conversely, Moore has expressed solid support for Israel, and attended the Alabama-Israel Task Force’s Nov. 18 gala near Decatur, along with U.S. Rep. Mo Brooks. The Task Force is a coalition of Christian and Jewish supporters of Israel in north Alabama.

On Dec. 1, Moore issued a statement urging Trump to move the U.S. Embassy in Israel to Jerusalem.

“The Nation of Israel has traditionally found a strong ally in the United States of America,” Moore said. “I am grateful that the Trump-Pence Administration is actively working to restore the trust that was betrayed during the Obama era and I applaud their efforts to move the Embassy as a signal of our continued friendship. In the United States Senate I will actively work to ensure that the Nation of Israel is strengthened to face all attacks from abroad and am committed to seeing the Embassy moved to Jerusalem poste haste (sic).”

Jones was considered a longshot until news broke three weeks ago from a series of women who claimed Moore, then in his 30s, was pursuing teen girls, and two have accused him of sexual assault.

Moore has denied all such claims, stating at church rallies that he does not even know any of the accusers. On Dec. 3, Debbie Wesson Gibson, who stated she and Moore dated when she was 17, produced cards and scrapbooks with handwritten notes from Moore. She said she came forward with the additional evidence after Moore started calling her a liar from church pulpits.

Shortly after the first women came forward, there were reports of robocalls claiming to be from “Bernie Bernstein” at the Washington Post, where the New York-accented caller offered over $5,000 for women to make claims against Moore. Those calls, aimed at discrediting the Post’s reporting, were also seen as playing into Jewish stereotypes of the media.

With the exception of friendly venues, Moore has dodged all questions from the media. When attending the Alabama-Israel Task Force gala, Moore was asked by Southern Jewish Life about the Bernie Bernstein calls. After considering it for a second, he declined to comment and walked away.

Some Moore supporters, disbelieving all of the women, have presumed Soros is paying the women to come forward.