Who is the rabbi that Roy and Kayla Moore “fellowship” with? 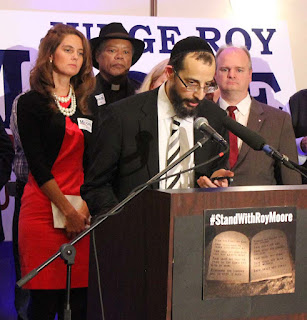 Rabbi Noson Leiter of New York spoke at a Nov. 16 event for Roy Moore, but is he the one Kayla Moore was referring to when she spoke of “fellowship” with rabbis?

Since Dec. 11, it has been the buzz of the Jewish community — who was Kayla Moore referring to at a campaign rally for her husband, Roy Moore, when she referenced having a Jewish lawyer and having “fellowship” with a rabbi?

Moore, the Republican nominee in a special election for U.S. Senate in Alabama, lost the Dec. 12 vote to Democrat Doug Jones in what is being described as one of the biggest political upsets in modern history.

A polarizing figure, Moore was twice removed as chief justice of the Alabama Supreme Court, in 2003 for refusing a court order to remove a 5,300-pound Ten Commandments monument he had installed in the Judicial Building, and in 2016 for directing probate judges to ignore a higher court’s ruling legalizing same-sex marriage.

Moore has been outspoken against Islam, even saying that Muslims should not be allowed to serve in Congress, and that the First Amendment protection for freedom of religion applies just to Christianity.

Last week, Moore spoke about George Soros, a Jewish philanthropist who is a favorite target for the right because of his support for left-wing causes, saying he could not identify with the world Soros comes from and suggested that Soros is headed for hell.

With rare exceptions, the Moores have found little support in the state’s Jewish community.

At the election eve rally, Kayla Moore said “Fake news would tell you that we don’t care for Jews. I tell you this all this because I’ve seen it all, so I want to set the record straight while they’re here. One of our attorneys is a Jew. We have very close friends that are Jewish and rabbis, and we also fellowship with them.”

The rest of the comment aside, for most Jews, the use of “fellowship” as a verb was puzzling, though that is a common expression in some Christian circles.

Devra First, a writer for the Boston Globe, decided to call every rabbi in Alabama “to see if any of them had ever fellowshipped with the Moores.”

“There aren’t a ton of rabbis in Alabama, so calling them all seemed feasible,” she wrote. By nightfall on Dec. 12, she had made contact with six rabbis, none of whom had contact with the Moores, but the name Noson Leiter was most often referenced by them.

Leiter, a New York rabbi who heads Torah Jews for Decency and is executive director of Help Rescue Our Children, spoke at a Nov. 16 rally in Birmingham, one of about 20 “faith and family” speakers defending Moore shortly after women accused Moore of sexual misconduct when they were teens and Moore was in his early 30s.

Leiter praised Moore for his “proven track record of fighting for public policy based on Biblical values and not perversion” and railed against abortion and “homosexualist gay terrorism.”

In response to the series of tweets by First, a couple of people wrote that Moore was likely referring to David Schneier, who leads Beth Hallel, a “messianic” congregation in Birmingham.

On Twitter, Sarah Boatwright stated that Moore was referring to her congregation, Beth Hallel, and chastised First for being “ignorant” by not contacting “all the rabbis in Alabama.”

She confirmed to Southern Jewish Life that she was talking about Schneier and Eric Walker, the previous leader of Beth Hallel.

“Messianics” are those of Jewish background who have accepted Jesus but feel they are still Jews, though the entire Jewish world, from right-wing to left-wing, considers them to be Christians. No Jewish group recognizes the “messianic” movement as part of Judaism, nor are their leaders recognized as rabbis.

Many evangelical churches support “messianic” congregations, which use Jewish symbols and rituals but give them a Christological meaning, as a way of converting Jews by convincing them that they aren’t really leaving Judaism behind. Many mainline Christian denominations see this as subterfuge.

In the South especially, most who attend “messianic” congregations come from a Christian background and believe that they are exploring the Jewish roots of their faith, desiring to learn more about the people that Jesus came from.

Southern Jewish Life contacted Beth Hallel, but Schneier was unavailable. When asked whether Schneier was whom Moore was referring to, the woman who answered the phone said “we can’t make a comment” and would not be able to help any further, then quickly hung up.

Schneier has not yet responded to emails asking for comment, and the Moore campaign also has not responded.

Schneier’s blog has a post from 2014 stating that Moore would be the guest speaker at their Shavuot service. Shavuot, of course, is the holiday that celebrates the giving of the Ten Commandments. Moore also was listed as speaker for Shavuot this year.

Beth Hallel’s Facebook page also has a photo of the Schneiers and the Moores from September 2016 in Montgomery at the conclusion of the hearing over Moore’s suspension as chief justice.

As for the attorney reference, Schneier and his wife, Leslye, met in 1973 as they were in their final year of law school at George Washington University, and started out practicing law.

Attorney Richard Jaffe, who is in Birmingham’s Jewish community, has represented the Moores’ son, Caleb, on a 2015 drug possession case, one of nine arrests for the younger Moore since 2011.