January is Jewish Film Festival month in the South 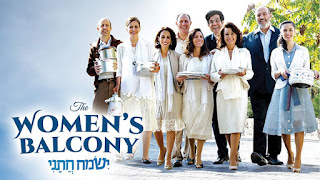 The Baton Rouge Jewish Film Festival will run from Jan. 10 to 14 at the Manship Theatre. Tickets are $8.50 and are available through the Manship’s website. Two free tickets to opening night are offered on the film festival website, to those who sign up for the festival email list.

The Mobile Jewish Film Festival offers its most diverse lineup yet, running from Jan. 11 to 28 in six different venues. Tickets are $8 for adults, $6 for students and seniors, except for the free film on Jan. 11 at the Mobile Museum of Art, though reservations are necessary for that screening.

Jewish Cinema Mississippi will open on Jan. 23 at the Malco Grandview Theatre in Madison, with all films at 7 p.m., except the final matinee on Jan. 28. The festival is sponsored by Beth Israel in Jackson and the Jewish Culture Organization at Millsaps College. Tickets are $10 for adults, $5 for students. A festival pass is $40 for adults by Jan. 16 and $20 for students.

“The Women’s Balcony,” an Israeli dramedy that was the country’s film of the year, starts with the collapse of a women’s balcony at a synagogue during a Bar Mitzvah. The overwhelmed older rabbi and a younger rabbi clash as husbands and wives are caught in between the battle lines over the role of women in the congregation. Baton Rouge: Jan. 10, Manship Theatre, 7 p.m. Mobile: Jan. 21 at Ahavas Chesed, 3 p.m. Rabbi Steven Silberman introducing, and a dessert reception following. Jackson: Jan. 27 at Malco Grandview, 7 p.m.

“As Seen Through These Eyes” is narrated by Maya Angelou and details a group of people who fought Hitler with the only weapons they had — charcoal, pencil stubs, shreds of paper and their memories. Mobile: Jan. 11 at the Mobile Museum of Art, 2 p.m. Museum Director Deborah Velders will introduce the film. Admission is free but reservations are necessary.

“Keep the Change” is a romantic comedy with a man who has autism and finds it difficult to accept that being different isn’t a hindrance to his budding romance. The film won best narrative feature at the Tribeca Film Festival. Baton Rouge: Jan. 11, Manship Theatre, 7:30 p.m.

“Denial” is a legal drama is about the libel suit that David Irving brought against Emory Professor Deborah Lipstadt, who called Irving a Holocaust denier in her groundbreaking book on the subject. But Irving sued in British court, where libel laws are different — meaning the writer has to prove what she wrote was true, and by extension, the Holocaust was being put on trial. Baton Rouge: Jan. 13, Manship Theatre, 7:30 p.m. Lipstadt will Skype in for a discussion after the film.

“Norman: The Moderate Rise and Tragic Fall of a New York Fixer,” has Richard Gere as the title character, Norman Oppenheimer, whose life changes dramatically for the better and the worse when the young troubled politician he befriended three years earlier becomes prime minister of Israel. Baton Rouge: Jan. 14, Manship Theatre, 3 p.m.

“Sammy Davis Jr.: I’ve Gotta Be Me” examines Davis’ life and career from the Depression era until his death in 1990 and features interviews with Quincy Jones, Whoopi Goldberg, Billy Crystal, Norman Lear, Jerry Lewis, and Kim Novak and includes never-before-seen photographs and excerpts from performances. The screening will be preceded by music from the Rat Pack, featuring Doug Breau. Mobile: Jan. 14 at Ahavas Chesed, 3 p.m. A dessert reception follows.

“1945” portrays two Orthodox Jews arriving at a village train station with boxes that say “fragrances” — but villagers fear they really came to reclaim property stolen from Jews during the war, and that many others will follow. The Hungarian film explores how non-Jewish former neighbors profited from the deportation of the Jewish community, and how a society fails. Mobile: Jan. 16 at Laidlaw Performing Arts Center at the University of South Alabama, 7 p.m. Novelist Roy Hoffman will introduce the film. Jackson: Jan. 24 at Malco Grandview, 7 p.m.

“Harmonia” is a contemporary adaptation of the biblical tale of Abraham and Sarah, with beautiful harpist Sarah married to Abraham, the charismatic conductor of the Jerusalem Philharmonic. The childless couple turns to an Arab horn player, Hagar, to carry their baby, leading to a clash of cultures that is reconciled through music. Mobile: Jan. 17 at USA Laidlaw, 7 p.m. Rabbi Dana Kaplan will introduce the film.

“My Hero Brother” is a documentary about Down syndrome youth who do a two-week trek through the Himalayas with their non-Down syndrome siblings. Mobile: Jan. 18 at USA Laidlaw, 7 p.m. Co-Producer Enosh Cassell of Israel will introduce the film and have remarks after.

“Fanny’s Journey” has won the Audience Choice Award at 20 Jewish film festivals. In 1943, Fanny was sent with her younger sisters from their home in France to a foster home for Jewish children in Italy. When the Nazis arrive in Italy, caretakers arrange for the children to be transported to Switzerland, but the plans fall apart and the 11 children are on their own to make the perilous journey to freedom. Mobile: Jan. 23 at the University of South Alabama Performance Center, Fairhope, 7 p.m. The film will be introduced by Jerry Darring.

“Riphagen: The Untouchable” is a Dutch film about the real-life manhunt for Riphagen, regarded as the Al Capone of Amsterdam and a “Dutch traitor.” He collaborated with the Nazis, befriending Jews and urging them to give him their jewelry and money for safekeeping, then betraying his victims to the Gestapo. A young policeman sees through Riphagen’s scheme and spends years trying to bring him to justice. Jackson: Jan. 23 at the Malco Grandview, 7 p.m.


“An Act of Defiance” recalls a 1963 arrest of 10 black and Jewish men in South Africa who were plotting sabotage against the Apartheid government. Nelson Mandela was part of the group, which was represented by Jewish lawyer Bram Fischer. The not guilty plea shifted attention to the political system’s injustice. Mobile: Jan. 24 at Bernheim Hall, 7 p.m. with David Meola introducing.

“A Heartbeat Away” features an Israeli cardiologist performing lifesaving operations in Tanzania, where five children die every day from heart conditions, but only a few of the hundreds of children can receive treatment. The film focuses on a 6-year-old with little chance of surviving. The short film “Dear God” precedes, about a Western Wall security guard who cleans up messages left in the wall. After a mysterious woman leaves notes in the wall, he decides to fulfill her deepest wish. Mobile: Jan. 25 at Springhill Avenue Temple, 7 p.m.

“The Testament” explores a man’s double investigation — to find secrets of his mother’s past, as she was a Holocaust survivor, and to prove the connection between an influential Austrian family and a massacre of Jews. He seeks the truth despite villagers’ denials and his mother’s silence. Jackson: Jan. 25 at Malco Grandview, 7 p.m.

“On The Map” is the against-all-odds story of the 1977 European Basketball Championship for Maccabi Tel Aviv, a massive lift for a nation still reeling from the 1972 massacre at the Munich Olympics, the 1973 Yom Kippur War and the traumatic 1976 hijacking of an Air France flight to Tel Aviv. Jackson: Jan. 28 at Malco Grandview, 2 p.m.

“Joe’s Violin” is about how a donated musical instrument leads to an improbable friendship through music of a 91-year-old Holocaust survivor and a 12-year-old school girl in the Bronx. Mobile: Jan. 28 at Springhill Avenue Temple, 7 p.m. A performance by violinist Enen Yu and pianist Christopher Powell will follow, with a dessert reception.