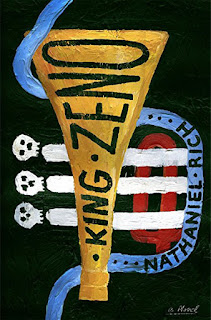 Nathaniel Rich didn’t intend to write a novel set in New Orleans, but “King Zeno” insisted on being told.

Writing the novel “became inescapable” after moving to the city in 2010, Rich said. Set in 1918, the historical crime novel features three individuals from different parts of the city, whose fates are intertwined by a series of major events in the city’s history.

After graduating from Yale, Rich wrote for the New York Review of Books, then moved to San Francisco and wrote “San Francisco Noir,” a 2005 work about the many film noirs that were set in the city. Martin Scorsese called it “a fascinating work of criticism disguised as a guided tour around a great city.”

While writing that book, he was quietly working on his first novel, “The Mayor’s Tongue,” which was published in 2008 and is set in New York City and Italy.

Rich was fiction editor of Paris Review from 2005 to 2010 and has had his short fiction published in numerous venues. He is a writer-at-large for the New York Times Magazine and writes regularly for the Atlantic and the New York Review of Books.

He moved to New Orleans in 2010 as part of what he describes as the “second wave” of post-Katrina migration. He had visited New Orleans while in college and since then “I had always had a dream of living in New Orleans… I really fell in love with the city. I’d made a couple trips here and always hoped to find an excuse to live here.”

Meredith Angelson, who he would later marry, was looking for a position as a public defender, and “I told her that I would move wherever she got a job,” and when it looked like they were heading to San Diego, “I had to wrap my head around that idea.”

But New Orleans was also her top choice, and shortly after San Diego expressed interest, New Orleans came through, and she started working for the Orleans Public Defenders office. She is now a staff attorney at the New Orleans office of the Southern Poverty Law Center.

Rich’s second novel, “Odds Against Tomorrow,” was written while he was in San Francisco and mostly done when he moved to New Orleans. Set in the New York of the “near future,” it describes a mysterious consulting firm that calculates and insures against worst-case scenarios, whether ecological, war or natural disasters — and then an actual “worst case” hits Manhattan.

Hurricane Sandy hit New York right before the book was published, but long after he had finished writing it. “Readers would ask if this was my response to Sandy,” which struck on Oct. 29, 2012, but he told them it was “a strange coincidence,” as it takes him five or six years to finish a book.

In his research for the book, he studied disaster scenarios and predictions from the Army Corps of Engineers and the Office of Emergency Management, and they turned out to be very accurate when Sandy hit, leading many to erroneously assume he wrote the book after Sandy.

In New Orleans, though, “people took it as a novel about Katrina, disguised as New York.” He said each reader “brings his or her own context to any work of literature” and both perspectives are valid.

He said the final sections of the book, set in a distant part of Brooklyn after the disaster, were rewritten “in some ways to reflect my experience of being in New Orleans some years after Katrina… where the effects of the storm are still a visceral reality.”

For his third novel, Rich moved from the near future to 100 years in the past, with the book set during the year of New Orleans’ 200th anniversary, and being released as New Orleans starts celebrating its 300th anniversary.

Rich became fascinated with the story of the Axeman, a serial killer who started his spree in May 1918, terrorizing the city with late-night home invasions and hacking victims in their beds.

In March 1919, a letter purporting to be from the Axeman was received by the Times-Picayune, and using imagery from the Biblical plague where the first-born Egyptians were slain, he threatened to kill New Orleanians at 12:15 a.m. on a certain night, but because of his preferred musical tastes, passing over homes where a jazz band “is in full swing.”

Rich said that was the moment when jazz, which the Times-Picayune had not much earlier referred to as a sinful form of music, crossed over from being looked down upon to becoming “the great American popular form.”

On the appointed night, New Orleans was filled with the sounds of jazz, and there were no killings. Months later, though, a handful of further attacks commenced, ending for the final time in October 1919. The Axeman was never identified or caught.

Also at the time, the Industrial Canal was being built in New Orleans, part of the “fact of life in New Orleans… grappling with a natural landscape that in many ways is inhospitable.” While he said the canal was hailed at the time as the second coming of the Panama Canal, it also “carried the seeds of doom” in hurricanes that have hit the area since then.

He wanted to write about the “difficult relationship between man and nature,” and with the crime wave of the time, a flu epidemic, the emergence of jazz “from the underground,” and the conclusion of World War I, a story started to emerge. “As I read a lot of newspapers from the time and other primary sources… there were elements fitting together,” and “at some point I couldn’t not write about it.”

While “King Zeno” is set 100 years in the past, authentic detail was still vital, because “so much of the city looks the same as it did then.” He added that he is living in a house built 30 years before the setting of the novel.

Usually, there is “safety” in writing about times long past, but in New Orleans “a lot of the settings I’m describing are still there.” Studying the character of the city in 1918, he found it to be “instantly recognizable” as the New Orleans of today.

A tremendous resource was the “incredible interviews” at the Friends of the Cabildo. Begun in 1972, the oral history project interviewed many people who were alive in the 1910s. The interviews are on tape and “very few are transcribed,” but “I was able to get a wealth of detail” about life in 1918. Rather than ask about historical events, the interviewers concentrated on “the mechanics of daily life” that added a “richness” to the narrative.

The book’s launch event will be on Jan. 9 at 6 p.m. at the Garden District Book Shop. Among his upcoming appearances are Jan. 30 at 5 p.m. at Lemuria Books in Jackson, Miss., Jan. 31 at 5:30 p.m. at Turnrow Book Co. in Greenwood, and with Thacker Mountain Radio at Off Square Books in Oxford on Feb. 1 at 6 p.m. He will also be at the Tennessee Williams/New Orleans Literary Festival in New Orleans on March 24.

Rich considers the novel “a valentine to the city. I’m excited to see how it is received,” and “to make my own small contribution to the literary tradition of the city.”