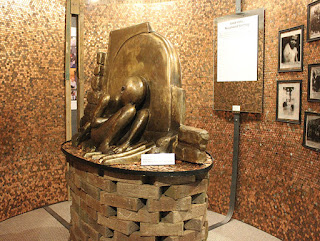 What began as a school project in rural Mississippi to collect 1.5 million pennies to symbolize the 1.5 million Jewish children murdered in the Holocaust has evolved into plans for a large memorial.

“The Unknown Child” exhibit at the Desoto County Museum in Hernando, about 25 miles south of Memphis, is a taste of the planned memorial, which is slated for a four-acre site on the Circle G Ranch in Horn Lake, known as Elvis Presley’s honeymoon getaway.

Diane McNeil said the exhibit is a miniature version of a full-scale permanent installation that the Unknown Child Foundation is planning. The exhibit opened in September, and will be at the museum through March 10 as a way of garnering support and raising awareness of the project.

The project began with Susan Powell and Melissa Swartz, teachers at Horn Lake Middle School, who wanted to increase student awareness of the Holocaust. A Pennies Project was started in 2009 to collect 1.5 million pennies representing the 1.5 million children.

The next year, Denise Turner asked if their Christian home-schooling group, Generation SC, could join in the effort, and the group has been involved in the project ever since. Peabody Place Mall in Memphis allowed the students to scoop up the pennies in the mall fountain, and relationships were developed with the Memphis-area Jewish community. The students also wrote to celebrities, politicians and athletes to reach the goal.

After three years, they had amassed the 1.5 million pennies, and plans began to establish a children’s Holocaust memorial in the area. The Unknown Child Foundation was established in 2014.

The foundation commissioned sculptor Rick Wienecke, an Israeli Christian, to create a piece for the project. He took his inspiration from the “Oratorio Terezin,” which was derived from the “I Never Saw Another Butterfly” book of children’s poetry from Terezin.

The Unknown Child sculpture depicts a child leaning against the inside of a crematorium door, reaching to the other side to clutch a piece of ground covered with olive branches, representing Israel.

Ten smaller copies of the sculpture have been made. In June 2014, the group debuted the sculpture at the Memphis Israel Festival, and presented one of the smaller versions to Jack Cohen, who hid in a Greek monastery with his family for two years during World War II, then had to flee to the forest.

In March 2016, the foundation announced a partnership with the Circle G Ranch in Horn Lake, which will be the site of the memorial. The property was once a retreat for Elvis Presley, and includes his honeymoon cottage and stables.

The property is being redeveloped into a tourist attraction by Davage Runnels Jr., and is expected to include a welcome center, restaurant and dynamic water feature on the property’s lake.

When the plan was announced, the pairing of a children’s Holocaust memorial to an Elvis project was explained through Elvis’ Jewish connection and his devotion to children’s causes. He had a longtime relationship with the family of Memphis Rabbi Alfred Fruchter, and ancestors on his mother’s side were Jewish. When his mother died in 1958, he made sure to include a Star of David on her tombstone, and he sometimes wore a Chai necklace in concert.

When “The Diary of Anne Frank” was performed in October 2016 at Desoto Family Theatre, there were presentations and videos about the project.

The planned memorial pathway is in a spiral shape leading to the central building, which will house the sculpture. Metal strips symbolizing rail lines run from the site perimeter to the memorial in quadrants, each relating major events in the Holocaust: The Nuremberg Laws, Kristallnacht, mass killings and the Auschwitz sorting upon arrival. The rail line for the Auschwitz segment does not reach the memorial, symbolizing the end of the line.

An exit tunnel will showcase liberation and hope for the future.

A memorial wall has pictures of children who died in the Holocaust, with a sole penny placed on the frame. The photos are etched on glass, almost transparent, backed by wooden pallets symbolic of the rough wood in the train cars that transported them to the camps.

Surrounding the sculpture is a curved wall covered with pennies from the project. The exhibit contains about 36,000 pennies, less than 2 percent of what was collected.

The walls in the museum are curved because of space, but in the actual memorial, the building will be in the shape of a Star of David with walls up to 20 feet high, covered in pennies.

The second phase of the project calls for a cultural center with classrooms and space for traveling exhibits.

The multi-million dollar project recently embarked on a “place-a-penny” campaign, where pennies in the memorial park walls can be dedicated in someone’s honor or memory, for $18 each.

While the Desoto County exhibit will close in March, McNeil said it is portable and can be brought to other venues in the region.

Peter Felsenthal and Marty Kelman were recently added to the Foundation’s board.

Felsenthal is CEO of Whitmor, Inc., wholesale distributors of storage, organization and laundry accessory products, based in Southaven, Miss.

Kelman, a second generation of Holocaust survivors, is chairman of Kelman-Lazarov, a financial planning and investment advisory firm in Memphis. His mother, Paula Kelman, was the first Holocaust survivor to speak to the students at Horn Lake Middle School when they began the Pennies Project.