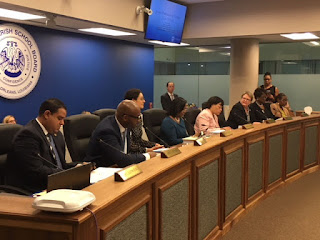 With backlash over Resolution R-18-5, which pro-Palestinian groups have hailed as a victory for the anti-Israel Boycott, Divest and Sanctions movement, the New Orleans City Council will likely revisit the seemingly-innocuous resolution that was presented as a broad statement of support for human rights.

Mayor-elect LaToya Cantrell issued a statement on Jan. 20 that she will “support the Council’s action to reconsider Resolution R-18-5 and to have it withdrawn,” most likely at the Jan. 25 Council meeting, adding that the Jan. 11 resolution’s “unintended impact does not reflect my commitment to inclusivity, diversity, and respect and support for civil rights, human rights and freedoms of all New Orleanians.”

Cantrell said “While I was not present for the vote, I authored and supported the passage of the resolution” after an outline had been presented to her by the New Orleans Palestinian Solidarity Committee.

Cantrell said the resolution’s passage has “shrouded the city in an undesired and damaging falsehood” as anti-Israel groups “now claim that New Orleans is now one of the largest cities in the United States supportive of BDS… a movement aimed at delegitimizing the State of Israel. This is totally inaccurate, untruthful and does not reflect the values of New Orleans.”

Personally, “I am neither supportive of the BDS movement nor in any way hostile to the Jewish community or the State of Israel. Nor was it my intention to commit the City of New Orleans to such positions.”

City Councilor Jason Williams, who facilitated the discussion and was a co-sponsor for the resolution on Jan. 11, said in a statement that he was not previously aware of the BDS movement.

Williams said there was no malicious intent in taking up what seemed to be a “resolution on human rights,” which was not on the agenda, at the end of the Jan. 11 meeting under suspension of the usual rules, but in retrospect “it was certainly a mistake in doing so. Because of the introduction under suspension, the discussion of the resolution before the City Council vote was not a diverse space of various viewpoints. It did not give notice or opportunity to dear friends and New Orleans residents who rightly feel deeply aggrieved by this vote.”

He said he will move to reconsider the resolution as a regular agenda item at the next meeting.

The non-binding resolution, presented at the request of NOPSC, spoke of international human rights, New Orleans’ designation as a “welcoming city” and asked for “the creation of a process to review direct investments and contracts for inclusion on, or removal from, the City’s list of corporate securities and contractual partners, according to the values of the City as referenced in this Resolution.”

The resolution was taken up at the end of a six-hour meeting, which had begun with a tribute to the Jewish Federation of Greater New Orleans and its work in the community. Because the resolution was discussed after suspension of the rules, only the NOPSC was aware that it was to be discussed. The four speakers who spoke about the resolution were there with the pro-Palestinian group.

The NOPSC is portraying their resolution as having nothing to do with Israel, saying it is the pro-Israel community that is bringing up Israel in the context of the resolution.

The group stated on Jan. 18 that “what we are asking is that corporations that are complicit in human rights abuses connected to Israel or anywhere else in the world, not be supported by the city of New Orleans. No exceptions.”

Prior to the vote, though, the group itself was mentioning only Israel in its publicity, promoting the resolution as the first step toward New Orleans divesting from Israel, and listing the meeting as a Facebook event called “City Council BDS Vote.” Their speakers referred solely to Israel in their comments before the vote.

A press release by NOPSC after the vote concentrates almost exclusively on Israel. Loyola undergraduate Marco Saah said “I don’t want to see the city I live in contracting with companies that profit off of the suffering and occupation of my homeland.”

The only mention of a country aside from Israel was in one quote from NOPSC founder Tabitha Mustafa, “Whether in Honduras or Palestine or Vietnam, companies that profit from the misery of New Orleanians and our families abroad should not do business with the City of New Orleans.”

Since the 5-0 vote, the Jewish Federation of Greater New Orleans and Anti-Defamation League have been working “tirelessly together to address the unconstructive and controversial passage” of the resolution, speaking with Council members and Mayor-Elect LaToya Cantrell’s transition team.

“We have jointly advocated that the resolution be both reconsidered and then withdrawn by the Council, the procedural mechanism the Council would utilize to reverse the resolution,” the groups said in a joint statement on Jan. 17.

New Orleans Mayor Mitchell Landrieu said his office and the City Attorney were not made aware of the resolution before the vote, and called it “ill advised, gratuitous and does not reflect the policy of the City of New Orleans.”

He said “From day one, our administration has been and will remain committed to human rights both in New Orleans and across the globe… My administration understands that words matter and that there are consequences to the actions of government. This resolution is concerning and does not reflect the city’s history of inclusion and diversity.”

Other Council members also expressed that their votes had nothing to do with Israel, despite how the vote had been portrayed nationally and internationally.

Councilmember Susan Guidry said she had “absolutely no knowledge” of BDS, but was wary of it because “the concept could be abused to create favoritism in local contracting.”

She was surprised when the resolution was considered at the end of the Jan. 11 meeting, and noted in a statement to Southern Jewish Life that “the comments from four supporters surprised me, but we do not generally engage the public when they make comments, and I didn’t know what to think of the comments.”

Guidry had already stated her concerns about contracts, but because “the resolution did not have the force of law” she voted for it. “I was not aware that it was backed by the Palestinian BDS movement or by any group with the intention to hurt another group, organization or country. Had I known, I would have strenuously opposed it.”

“I immensely regret the fact that the Council offended many in the Jewish community in New Orleans and throughout the world,” Guidry said, adding that she intends to support the “withdrawal or recission” of the measure at the Jan. 25 meeting.

The NOPSC posted an article about the backlash, by the rabidly anti-Israel site Mondoweiss, quoting it as saying “The statements come after backlash from the outgoing mayor — and pushback from major pro-Israel organizations who lobby against the law, and who for years have given donations to local leaders.”

The article also plays up the “human rights adherence” element of the resolution and chalked up the criticism to “the ubiquitous influence of the pro-Israel lobby and its financial ties to U.S. lawmakers.” It gave “international law firm Jones Walker LLC and the largest private ambulance company in the nation, Acadian Ambulance” as examples, saying they are “major underwriters of the local Jewish Federation” and contributors to Landrieu and Appel.

The Orleans Parish Prison Reform Coalition praised the resolution’s passage and “stands in solidarity with the New Orleans Palestinian Solidarity Committee’s effort to ensure that the City of New Orleans avoids contracting with or investing in corporations whose practices violate human rights.”

Michael Jacobs, a New Orleans native who is now editor of the Atlanta Jewish Times, said “It would hurt more than a Saints postseason loss to the Falcons, but if New Orleans ever tried to cut itself off from Israel, I’d never go back. I’m sure I wouldn’t be the only one.”

Williams said “It is my sincerest desire that despite the unintended consequences of this resolution, my fellow council members and I can use this moment as an opportunity for greater dialogue and education as we continue to pursue accurate and considerate representation for our city.

He told the local Jewish community that “my hope is that I can count on you as a partner in empowering our community and correcting any misrepresentation of this council’s intent nationally and internationally.”

Reflecting on the past week, Cantrell stated “well intentioned actions can be taken out of context by others for their own political benefit, with negative connotations that overshadow any original motives; I believe that is what happened with this resolution.”