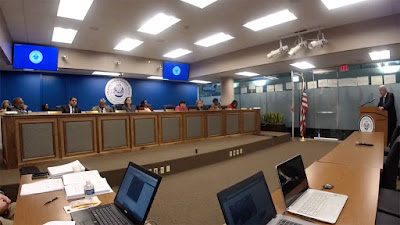 As resolution proponents in the hall hold posters against the glass, Arnie Fielkow addresses the New Orleans City Council, asking for withdrawal of the controversial resolution.

At a contentious meeting this morning, the New Orleans City Council unanimously withdrew a controversial human rights resolution that had been passed on Jan. 11 and that was immediately categorized nationally and internationally as showing support by the city of the anti-Israel Boycott, Divest and Sanction movement.

The non-binding resolution, presented at the request of NOPSC on Jan. 11, spoke of international human rights, New Orleans’ designation as a “welcoming city” and asked for “the creation of a process to review direct investments and contracts for inclusion on, or removal from, the City’s list of corporate securities and contractual partners, according to the values of the City as referenced in this Resolution.”

City Councilmember Jason Williams said the vote’s “resulting flurry of debate and controversy has played out locally, national and internationally.”

Questions about it being considered at the end of a six-hour meeting with no public notice, and under suspension of the rules, were part of the controversy. Additionally, Williams moved to reconsider the resolution on Jan. 25 because “the voice of this council has been represented as saying far more than was ever said in the four corners of the document” by linking it with the BDS movement.

After the meeting, the Jewish Federation of Greater New Orleans and Anti-Defamation League’s New Orleans office issued a statement, saying “By withdrawing the resolution, it allows the opportunity for a clean slate to begin to engage in meaningful, transparent and inclusive dialogue on how this community advances issues of civil rights and human rights, and how we collectively build a better New Orleans reflective of our commitment to these values.

“The Federation, ADL, and the Jewish Community Relations Council stand by as willing partners and participants in this discussion. The withdrawal of the resolution in no way reflects a lack of commitment to human rights, from either Federation, ADL or the City Council. Rather, this important conversation can now happen in the light, with transparency and inclusivity.”

At today’s meeting, proponents of the resolution crowded the hallway outside the Orleans Parish School Board room where the council meetings are taking place during renovation of the Council chambers at City Hall. Four speakers from the local Jewish community opposed the resolution, while speakers in favor of the resolution took aim at the local Jewish community, claiming the community wants to deny Palestinians basic human rights, and framed it as a battle between justice and bowing to campaign contributors.

Tabitha Mustafa, founder of NOPSC and one of the speakers for the resolution on Jan. 11, said those in the hallway were people of color, from the LGBTQ community, immigrants, Palestinians, Muslims, “those who stand for justice are all outside, and there are a few of us who made it into this room.”

Mustafa said, “It is completely unfair and ridiculous to think that a group of all-white Jews can say that every person out there, every person of color, every person from a marginalized community, doesn’t matter. That is worth rescinding an entire human rights resolution in the name of everyone, in order to exceptionalize and protect a few people.”

Though at the Jan. 25 meeting, proponents said the resolution was universal and did not single out Israel, prior to the Jan. 11 vote, NOPSC itself was mentioning only Israel in its publicity, promoting the resolution as the first step toward New Orleans divesting from Israel, and listing the meeting as a Facebook event called “City Council BDS Vote.” Their speakers referred solely to Israel in their comments before the vote.

A press release by NOPSC after the vote concentrated almost exclusively on Israel. Loyola undergraduate Marco Saah said “I don’t want to see the city I live in contracting with companies that profit off of the suffering and occupation of my homeland.”

When Mayor-elect LaToya Cantrell noted that the resolution had been interpreted by outsiders as a statement that New Orleans was now one of the largest cities to support BDS, there was a massive cheer from the resolution’s proponents in the room. Cantrell continued by stating that characterization was an “undesired and damaging falsehood” and that “this is totally inaccurate, untruthful and does not reflect the values of New Orleans.”

Williams stated that each side would be given 15 minutes to comment, with those opposing the resolution going first because they had not been given an opportunity to speak on Jan. 11. Proponents of the resolution were then given the final 15 minutes.

A woman in the audience protested the parameters, given the number of people who wanted to speak, and roughly 200 activists outside the room, to which Williams responded that there are only so many minutes in the day, and this was an equitable process that is typical for controversial topics before the council.

After the second out-of-order protestor, Williams said “we’re not going to solve the Middle East crisis in the city of New Orleans today… but I want to make sure we have equitable time on both sides.”

As Williams and Cantrell spoke, activists in the hall chanted “Let Us Speak.” They continued to chant “our voice matters” and “human rights for all” louder as representatives of the Jewish community spoke in opposition to the resolution, then were silent during the proponents’ remarks.

Each spoke of their groups’ history of advocating for groups throughout the community, including speaking out against the anti-Muslim travel ban, for immigrant rights, LGBTQ rights and the removal of Confederate monuments. Ahlquist said the ADL “unequivocally supports civil and human rights” but “this resolution is not the way to do this.”

Cohn said the resolution was “cleverly masqueraded as a high-minded civic statement” that “sounded so good.” It took no time, however, to see the deception, he said, in the form of “the joyous and triumphant proclamation touting the historic first by the BDS movement in a U.S. Southern city,” a comment that also drew cheers from the resolution proponents.

Cohn, a founding member of the New Orleans Human Rights Commission noted the presence of Jewish Voice for Peace members who were dressed in identical green T-shirts that read “Jews for Human Rights: No Exceptions.” Cohn said there used to be a whole lot more Jews who were anti-Zionist like them, “but after 1933 and 1945, there were many fewer,” an observation that drew howls of protest from JVP.

In asking for the withdrawal of the motion, Kaplinsky said NCJW “is a willing partner in the conversation moving forward.”

Fielkow said he has “great respect” for the groups behind the resolution. “On another day, and another topic, the Jewish community would be standing shoulder to shoulder with them as we have historically stood up for human and civil rights, equity, diversity and the core tenet of Jewish values, tikun olam, repairing the world.”

On the topic of BDS, “we must respectfully disagree with the resolution’s proponents,” Fielkow said. “It does not in any way advance what I hope is the common goal of everyone in this building… a peaceful resolution of a historic and complicated conflict so that all parties on both sides can live with peace, security and prosperity.”

“Being labeled a BDS city is not beneficial to New Orleans in any way,” he noted.

In concluding his remarks, he addressed everyone, including the resolution proponents, with “may all of us be strong and courageous enough to sit together and have dialogue on difficult topics” like the council does every two weeks.

As Fielkow spoke, those in the hall started to press handwritten posters against the glass above him, above where the glass was frosted. The posters had individual responses to the phrase “I support human rights because…”

The first speaker for the resolution was Rabbi Michael Davis, who flew in from Chicago for the meeting. A founding member of the Rabbinic Council of Jewish Voice for Peace, Davis leads Makom Shalom in Chicago and noted he had been rabbi in Baton Rouge.

Davis said “the New Orleans City Council is fulfilling the best of our Jewish teachings in acting on its ethical and social obligations… our prayer is that other city councils will join New Orleans in using their economic power to stand for all human rights.”

He criticized “some Jews” who spoke against the resolution, including local rabbis and the Federation. Davis said “pro-BDS is a loaded term, an incendiary term. It is code for anti-Semitic. They are saying that to support human rights, including in Israel/Palestine, is to hate Jews.”

Chloe Sigal from the Congress of Day Laborers said the resolution was the work of many local groups in response to Donald Trump’s election.

In her remarks, Mustafa asked “who opposes human rights? Terrorists. White supremacists. The president. But it also seems that the Jewish Federation, the ADL, the mayor of New Orleans and now suddenly the city council have taken the side of opposing human rights.”

She said there is a “scorched earth policy when it comes to Palestinians having human rights.”

Mustafa also charged, “Let’s think of the role that the ADL played in having Muslims and African-Americans here in the U.S. murdered during the apartheid South Africa era. Is that who you want to stand with?”

She said that even though Israel is not mentioned in the resolution, the Federation, ADL, Jewish Community Relations Council, Sen. Bill Cassidy and Mayor Mitch Landrieu, “the very same mayor that brought down the Confederation monuments,” and the Council, all oppose the resolution, asking when all of them have been on the same page. “Never,” she asserted.

Trying to figure it out, “It wasn’t shocking for me to find out that ironically the very same donors who contributed to the campaigns of Cassidy, Landrieu and multiple city council members are also opponents of the human rights resolution,” she said.

She added the only explanations for opposing the resolution are Islamophobia, since “the Palestinians are one of the groups that helped pass it,” and complicity, that the opponents “know that Israel has human rights violations.”

Mustafa asked “Is the Zionist lobby willing to continue to destroy and defame reputable social justice movements by using the scorched-earth policy in order to deem anything that is a critique as anti-Semitism, and not hear out valuable concerns of the oppressed?

“It is never the job of the oppressor to tell the oppressed how to defend our rights,” she said.

All BDS means, she said, is that Palestinian lives matter, “nothing more.”

He said being an ally “is not ownership. It does not mean you own my voice on every vote.”

Williams continued, “We all need to realize there’s a difference between a friend you’re in disagreement with and a mortal enemy. There are not two sides to this issue. There are a number of sides.”

Williams said “the passage of that resolution was flawed” both by being done under suspension and by being erroneously portrayed. He expressed hope that there would be dialogue between those in favor of the resolution and those opposed.

“I’m certain folks on both sides agree with the black and white words in that resolution,” he said, but “how we are reflected nationally and internationally is up to the members of the city council. No one else is going to interpret a resolution that comes from this body.”

With that, he moved to withdraw the resolution, and the withdrawal passed without opposition.

The resolution’s proponents then broke into song in the chamber, staying in the room for another 20 minutes, causing the council to go into recess. After the room was cleared and the meeting continued, the song continued in the building’s lobby.