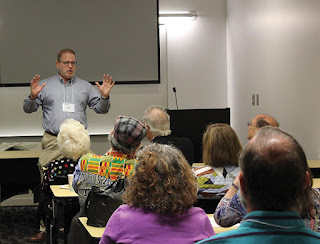 Organizers have unveiled the slate of presenters, from laypeople in New Orleans and across the country, to most New Orleans rabbis. In all, the weekend will include about 90 presentations in what is being called a “weekend festival of Big Tent Jewish learning, arts, culture and spirituality.”

The festival opens at 4:30 p.m. on March 16 at Gates of Prayer, with a Shabbaton that evening and on March 17. There will be services at Gates of Prayer in Orthodox, Conservative and Reform styles, with every group coming together for meals. On Shabbat morning there will also be an alternative spiritual and meditation service.

Housing can be arranged for out-of-town participants who need to be within walking distance.

Havdalah on March 17 and the March 18 sessions will be at the newly-renovated Uptown Jewish Community Center. There may be as many as nine sessions simultaneously, and attendees may freely wander in and out of sessions.

An international movement, Limmud has conferences in 80 communities around the world. Limmud operates on the core value that everyone is a learner and everyone can be a teacher, and sessions are designed to be interactive. All presenters are volunteering their time, and the organizers are also volunteers.

Several national speakers will be coming to New Orleans for the weekend.

Rabbi Danya Ruttenberg, one of the Forward’s 50 most influential women rabbis and rabbi-in-residence at Avodah, will speak on “I and Thou: Creating a 21st Century Jewish Sexual Ethic” and “Nurture The Wow: Parenting as a Spiritual Practice.” After her mother died of breast cancer, Ruttenberg wrote “Surprised by God: How I Learned to Stop Worrying and Love Religion.”

Meredith Polsky, founder of Matan, will speak on creating a culture of inclusion in Jewish institutions and Jewish education. A 2017 Covenant Award recipient, Polsky co-authored “I Have a Question about Death: A Book for Children with Autism Spectrum Disorder or other Special Needs.”

Bill Dauster, former deputy chief of staff for Senate Majority Leader Harry Reid and deputy director of the White House National Economic Council, will speak on “Ethics in Government: What Jewish Sources Tell Us” and “Government Power: Mixed Feelings on Kingship in the Hebrew Bible.”

Rabbi Michael Cook, Bronstein Professor of Judeo-Christian Studies at Hebrew Union College, will give two sessions. The only American rabbi with a full professorial chair in New Testament, Cook will speak on “Reformulating ‘Jesus and the Jews’ over the Centuries: Persistent Failures of the ‘Cafeteria’ Approach,” and “Rapture, Antichrist, 666, Armageddon: Explaining Southern Evangelical Theology.”

Cook’s wife, Judy Chessin, will give a “Hebrew Bible Overview” version of “Game of Thrones: Biblical Style,” examining the intrigue around King David.
Zachary Schaffer, community strategy associate at the Jewish Federations of North America’s Israel Action Network, will lead a session on “Reclaiming and Reaffirming Zionism as a Progressive Cause” and “The Disarming Power of Narrative: How Storytelling Can Transform our Conversations about Israel.”

There are several other presenters from outside the New Orleans area.

John Cohen, athletic director and former baseball coach at Mississippi State University, will speak on “The Words We Use” and how to be a strong team member.

Rabbi Steven Jacobs, Aaron Aronov Endowed Chair of Judaic Studies at the University of Alabama, will speak on “The Holocaust 70 Plus Years On: What Have We Learned?”

Geochemist Paul Aharon will recount the story of the Holocaust Torah at Jacobs’ congregation in Tuscaloosa, in “Torah Scrolls Have A Life of Their Own.” The congregation received a scroll from Westminister Temple in London, repository for almost 2,000 Torahs rescued from the Holocaust, but that scroll was of unknown origin and age. Upon getting permission to carbon-date it, the congregation discovered it is one of the oldest complete Torah scrolls in existence.

Cantor Neil Schwartz of Agudath Achim in Shreveport will present “A World of EnCHANTment: Comparing Jewish, Muslim and Hindu Chants.”

Rabbi Judy Caplan Ginsburgh of Alexandria, who serves B’nai Israel in Monroe, will lead a Shabbat sing-a-long for children and a session on “Healing Ourselves through The Tree of Life: Comparing our Chakras to the Sefirot.”

Local presenters include Lawrence Powell and Holocaust survivor Anne Levy talking about “The Power of One in a World Made by (David) Duke: Why Confronting Hate is More Important Than Ever.”

Rabbi Yossie Nemes will speak on “Our Forgotten Brothers and Sisters: Tales from Behind Bars,” his visits with Jewish inmates in Louisiana; Oklahoma-native Mark Rubin and Ben Schenck will speak on Klezmer as Jewish Jazz.

Hillary Rossman will share “Guns ‘n (Ha)Roses,” her experiences as a Jewish FBI agent for the past 21 years. She served in New Orleans from 1997 to 2007, then after seven years in Phoenix, returned to New Orleans as Chief Division Counsel. Dashka Roth will speak on “What is Jewish Art?”

While the speaker list and topics have been announced, the exact schedule has not been finalized.