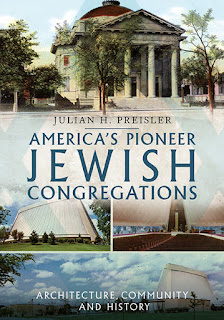 As a child, Julian Preisler was fascinated by a large painting at Temple Israel in Columbus, Ohio, depicting their “old” building. An architecture and history buff at the age of 10, he also had religious school classes at Agudas Achim, which was closer to where Temple Israel had previously been located, so “after school I would pester my parents to drive around and look for it after we bought bagels and had lunch.”

After being unable to find it, he asked one of the rabbis, who told him the old building had been torn down. “In my young mind,” he said, “I could not understand why such a beautiful building was no longer the temple and why it was torn down.”

That helped spark his interest in historical preservation, and his latest work is the just-published “America’s Pioneer Jewish Congregations.” In it, he details the history and houses of worship for the oldest still-functioning synagogue in each of the 50 states, along with Washington D.C., Puerto Rico and the U.S. Virgin Islands.

The book demonstrates a wide range of architectural styles and eras, from massive cathedral-like structures to thoroughly modern interpretations. Preisler said he wanted to produce an easy-to-read book of mostly photography to document “the diversity of America’s oldest congregations,” and doing it state-by-state provided that type of range.

His previous books were about synagogues in Philadelphia, central and western Pennsylvania and West Virginia.

His interest in history also stems from his parents and all four grandparents being Holocaust survivors. “I grew up with an early knowledge of the years 1933 to 1945 and was always fascinated with the lives of my family members prior to the war,” he said.

A professional genealogist, he has also chronicled numerous Jewish cemeteries around the country, including in Demopolis, Biloxi, Laurel and Meridian.

Preisler said “life is full of changes, some good, some bad, but we have a responsibility to document our past both with regard to our family history, our built environment and our culture.”

Alabama’s Springhill Avenue Temple in Mobile, formed in 1844, is described with the current structure and the since-demolished historic Government Street and Jackson Street Temples.

Florida’s oldest congregation is not in the Miami area, but Pensacola, where Temple Beth-El began in 1876. Mississippi’s Temple B’nai Israel in Natchez is also profiled. In Tennessee, it’s Temple Israel, formed in 1853.

In Arkansas, he writes about B’nai Israel in Little Rock with the recently-closed Anshe Emeth in Pine Bluff, which were chartered five days apart in 1867.
Both Touro Synagogues are profiled — in Newport, R.I. and New Orleans, though Louisiana’s oldest congregation and the oldest synagogue outside the original 13 colonies has just one image in the book, from a 1913 postcard.

Of course, the famous Kahal Kadosh Beth Elohim in Charleston, S.C., formed in 1791, and Mickve Israel in Savannah, Ga., formed in 1740 and one of only six remaining congregations from the Colonial period, are profiled.

He said Beth-El in Pensacola and Springhill Avenue Temple in Mobile were particularly helpful in his research, and he hopes to do another book concentrating on Southern synagogues. Signed copies are available through his website.