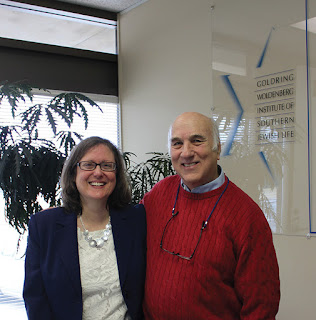 This month, Michele Schipper will quietly move down the hall at the Jackson headquarters of the Goldring/Woldenberg Institute of Southern Jewish Life.

Having served as the Institute’s Chief Operating Officer since 2007, Schipper will become the Chief Executive Officer on Feb. 19, succeeding Macy Hart, who founded the organization in 2000.

Hart founded the ISJL as a way to deliver services to isolated and underserved Jewish communities in a 13-state region from Virginia to Texas. The ISJL developed a standardized curriculum for religious schools, provides rabbinic services with traveling rabbis, cultural and historical programs, promotes social action and historic preservation.

Schipper said her immediate goal is “to continue the growth that has taken place over the last several years,” increasing the reach of the main programs.

After a sabbatical over the next few months, Hart will take a new position “to be helpful where needed” and work on projects he did not have time for as CEO.

Regarding the transition, Schipper said “To the outside person, it’s seamless — they’re not going to feel an immediate change in direction.”

Every department head in the ISJL’s six departments is continuing, and Schipper had a role in the hiring of each of them. “She’s got her team,” Hart said.

Schipper was selected by a search committee headed by Rayman Solomon, former board chair. Current Board Chair Rachel Reagler Schulman said “No one could ‘replace’ Macy; our founder, visionary, and first leader,” but “our conversations and interview process led us to the conclusion that Michele Schipper was truly the right choice.”

Aside from an initial informational interview at the start of the process, Hart did not play a role in the selection process.

Hart said Schipper innately understands the ISJL’s mission because she grew up in Jackson, and “her family was the center of the Jewish world for a lot of people” through the Old Tyme Deli.

Pursuing a career in Jewish non-profit management, Schipper left Mississippi for California, to work as assistant director of Wilshire Boulevard Temple Camps, whose director at the time was also from Mississippi. She spent 20 years out west, returning to Jackson in 2007 after four years as executive director of the Jewish Community Center of Greater Albuquerque. She had previously run two JCCs in southern California.

“I never really imagined once I left Jackson that there would be an opening for me to return,” she said. “I was a Jewish professional, what would I be able to do here?”

Hart said he kept in touch with Schipper, especially when she came home to visit family. In 2007, “I really was looking for some help” with the Institute. “Too much was not getting done when I was gone” because there was a missing puzzle piece in the organization, a “crucial staff member.”

“She really did put structure here,” Hart said, and “this is her organization as much as it is mine.”

He added, “Over a decade, she managed to enhance our efficiency, grow our staff, and work alongside the board and me to place the ISJL amongst the most impactful and innovative Jewish organizations.”

Schipper said when she was hired in 2007, “it was a wonderful homecoming,” and succeeding Hart “is an honor.”

She just finished her two-year term as president of Beth Israel in Jackson, and noted that this transition comes in ISJL’s 18th year of existence. “Getting to continue this legacy and lead the organization into the future is truly exciting.”

In the first 18 years, “we’ve delivered on everything we said we were going to do, and even more that we didn’t think of” at first, Schipper said. The board and staff are all “committed to making sure the ISJL continues to succeed on all levels.”

Schipper noted that several staffers, such as past Education Fellows, have returned to ISJL in different capacities. “That says a lot,” she observed. “They are all ambassadors and we take pride” in them.

The Institute began as an outgrowth of Hart’s personal story. He grew up in the only Jewish family in Winona, Miss., schlepping 160 miles round trip every Sunday for religious school. He became active in the National Federation of Temple Youth, meeting Jewish peers from around the region, worked his way up the ranks and was elected as national president in 1967.

During the 1960s, there was a major push to establish a Jewish summer camp in Mississippi, and the Southern Federation of Temple Youth, the local region, was heavily involved in that effort.

As Hart was finishing college, he offered to work for NFTY in New York “for free.” Instead, he was told, the Henry S. Jacobs Camp was becoming a reality, and it was suggested that he work there instead.

In a NFTY alumni interview, Hart said Rabbi Sol Kaplan, regional director of the Southwest Council of the UAHC, was in charge of the camp because “no one would take the director’s job because of the fear perceived in Mississippi.”

This was less than three years after the Temples in Jackson and Meridian were bombed by the Klan, along with the home of Rabbi Perry Nussbaum in Jackson.

Kaplan hired Hart as an administrator for the camp’s first summer, grooming him to take over as director at the end of the summer. He would lead the camp for 30 years.

Jacobs Camp was established as a summer refuge for Jewish kids who came from the numerous small towns around the region, where they might be the only Jewish child or one of a handful in the town. As a place to strengthen Southern Jewish identity, when congregations in the region downsized or closed, they often gifted their ritual items to the camp.

A year after the camp opened, Vicksburg’s Anshe Chesed Temple, which had moved into a smaller building, asked Hart if he wanted the ark from the old building before the building was demolished. The collection grew from there, leading Hart to establish the Museum of the Southern Jewish Experience at the camp in 1986.

As the museum’s role expanded, including its first major public exhibit, “From Alsace to America” in 1998, Hart decided to work on his “dream of trying to find a way to bring services to small and isolated Jewish communities.” That led to his establishing the Goldring/Woldenberg Institute of Southern Jewish Life in 2000, with a black-tie gala announcement at the Audubon Tea Room in New Orleans that September.

Just because he is stepping aside as CEO doesn’t mean Hart isn’t still dreaming big.

There are some goals Hart will work on because he did not get as far on them as he would have liked. Expanding the organization’s endowment is one of the biggest. “I would like for all the departments, Fellows, positions, to be named so the time can be spent on program delivery and not having to continue to raise all the dollars,” he said.

He also would like to take the education curriculum to the next level — year-round learning. When ISJL developed a standardized curriculum for religious schools, it was done with the idea of having a basic Jewish literacy available to communities of all sizes, a “secular-world approach to Jewish education.”

What about summer? “None of the movements have a mandated curriculum for summer camps,” he observed. Camp can be a “launch of the year ahead or culmination of the year behind,” and standardized plans can be developed for a camp setting.

He also would love to see a “Camp Birthright” effort to place as many Jewish 4th and 5th grade students in summer camp, “highly subsidized.” Another component would be a savings plan for an Israel trip, which the Jewish teen movements offer. By 11th grade, Hart explained, the campers have developed deep friendships, and then they do six weeks in Israel with those friends, having a much deeper experience than 7 to 10 days in college. “They grow up together. They go to Israel together. It’s a hands-on field trip.”

He also reached back to a vision he expressed at the 2000 introduction — replicating ISJL in other regions, such as an Institute of Midwestern Jewish Life. He recalled that ISJL “had to do it one department at a time, selling theory.” But now, they have the structure and the model to replicate.

He also wants to be an ambassador for the organization in its 13 states, telling the ISJL story. “We’re well known on a national level in the Jewish organizational world,” including being perennially listed in the Slingshot Guide of most innovative Jewish non-profits, “but in the grassroots places where we are making an impact, they have no idea who we are.”

Schipper also wants to see a greater awareness of the Institute. She said she wants to get to where the reaction that ISJL gets shifts from “I had no idea” to “continue the good work.”