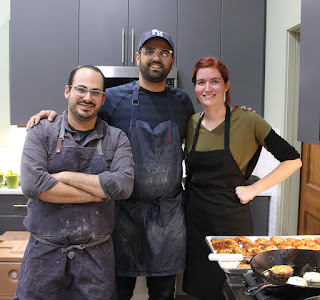 The next chapter in Alon Shaya’s culinary journey will unfold in the next few months with the opening of two new Israeli restaurants — Saba in New Orleans and Safta in Denver.

After several months of his new company, Pomegranate Hospitality, doing events in the region, this will be the group’s first restaurant venture.

Shaya said it is fitting that the first two restaurants by Pomegranate Hospitality will have the Hebrew words for “grandfather” and “grandmother.” His forthcoming cookbook, “Shaya: An Odyssey of Food, My Journey Back to Israel,” which will be released on March 13, details the influence of his grandparents on his food memories. “It’s a great story, and we’re excited to share it.”

Shaya, who won the 2015 James Beard Award as Best Chef in the South, first came to New Orleans to work at Besh Steak in 2001. In 2009, Shaya’s passion for Italian cuisine led him and chef John Besh to open Domenica, followed by the casual Pizza Domenica in 2014.

A 2011 culinary trip to Israel, organized by the Jewish Federation of Greater New Orleans, reawakened Shaya’s childhood memories of Israeli cuisine, and in February 2015 he opened Shaya, a modern Israeli restaurant that quickly achieved international acclaim. In 2016, it won the James Beard Award for Best New Restaurant.

In September 2017, Shaya was fired from the three restaurants after Shaya spoke with a Times-Picayune reporter who was working on a story about 25 former Besh Restaurant Group employees who were alleging sexual harassment. Shaya said he was fired for speaking out.

In October, the story was published, and Besh stepped down two days later. By then, Shaya was looking forward to his next ventures, forming Pomegranate Hospitality and attracting much of the talent from Shaya Restaurant.

At first, Shaya tried to purchase the Israeli restaurant that bears his name, but in December he said he had given up that battle. A suit continues over the use of his name, and on Feb. 7, a federal judge denied Shaya’s request for an injunction forcing the restaurant to stop using his name.

Though the legal battles continue, Shaya emphasizes looking forward, staying “positive, thinking about the opportunities that exist, opportunities I can make for people.”

The new restaurants are “going to be updated,” from his previous venue, and “it’s really great to be able to cook for our community in New Orleans again.”

Zach Engel, who was chef de cuisine at Shaya Restaurant, will be the culinary director of the two restaurants. In 2017, he won the Rising Star Chef award at the James Beard Awards.

A wood-burning oven will produce “hot and steamy” pita bread, made from Bellegarde Bakery wheat. Among the influences on the modern Israeli cuisine will be flavors of “Bulgaria, Yemen, Syria, Morocco, Turkey, Palestine and Greece.”

Shaya also plans “an amazing brunch” on weekends with hand-sliced smoked fish, bagels, shakshuka, “all the wonderful things I like to eat for brunch.”

The past six months have given the Pomegranate team “time to really develop the culture to become a great company that will put the team first.” The restaurants are “going to stay true to who we are as a company.”

Suzi Darre is the “Director of Culture,” overseeing cultural and sexual harassment training and ensuring a safe and comfortable work environment.

For the second restaurant location, Shaya chose Denver because he and his wife have visited many times in the past and “fell in love with Colorado.” He also used to visit his sister there when she lived in Boulder.

Last summer, at the Aspen Food and Wine Classic, he met the leaders of Zeppelin Places. “They really do things the right way, being very community focused,” he said.

Soon after, he was in Denver for the Top Chef episode that took place at the Comal Heritage Food Incubator, which trains those from low-income, refugee or immigrant backgrounds in the culinary arts. Many of the trainees are from Iraq or Syria. “They do really amazing work,” Shaya said.

A few weeks after the Top Chef filming, he returned to work with the chefs at Comal, and Zeppelin told him of the opportunity they had at Source Hotel.

This weekend, Shaya is headlining a South Beach Wine and Food Festival event in Fort Lauderdale, hosting a “Women of Syria” dinner with Ingrid Hoffman. Shaya said a mother and daughter team from Comal will be cooking with them.

“We’re really excited about what we’re doing next,” Shaya said. As for plans beyond that, Shaya said between the two restaurants and the cookbook, that’s enough for right now.

Shaya will have a book launch for the cookbook at the Uptown Jewish Community Center in New Orleans on March 14 at 7 p.m.