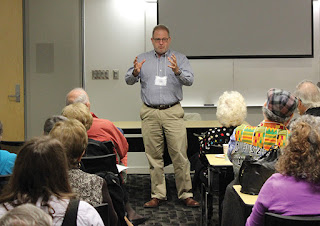 New Orleans’ Big Tent of Jewish learning, LimmudFest, will have hundreds of attendees sampling about 100 presentations along 10 learning tracks the weekend of March 16.

Several national and international presenters will be in town, joining a wide range of local experts that includes a burlesque performer to a Beatles expert to a culinary queen.

Registration begins at 5 p.m. at Gates of Prayer in Metairie, where there will be Reform, Conservative and Orthodox services under one roof starting at 6:15 p.m., along with a prayer, song and dance option, led by Rabbi T’mimah Ickovits. Everyone will convene for dinner at 7:30 p.m., followed by a Shabbat Tisch at 8:45 p.m.

Among the 4:30 p.m. presentations is “They Like Us! They Really Like Us? Christian Zionism in the South,” led by Southern Jewish Life publisher Larry Brook.

Evening programs will shift to the Uptown Jewish Community Center at 8 p.m., and the 8:30 p.m. programs are open to the community.

On March 18, single-day registration begins at the Uptown JCC at 8:30 a.m., with sessions starting at 9 a.m. There will be a break for lunch at 12:30 p.m., including a book signing with presenters who are authors, and tours of the newly-expanded JCC.

Sessions resume at 1:30 p.m. and continue until the 5 p.m. closing program.

An international movement, Limmud has conferences in 80 communities around the world. Limmud operates on the core value that everyone is a learner and everyone can be a teacher, and sessions are designed to be interactive. All presenters are volunteering their time, and the organizers are also volunteers.

Trixie Minx will present “Under the Big Top: Jews in the Circus, Burlesque, and the Variety Arts.” At the forefront of the New Orleans Burlesque Revival, Minx is a leader in the preservation and innovation of the art of tease. As a performer she is best known for incorporating comedy into her classic style of dance. She is also recognized as a premiere burlesque producer with four New Orleans–based shows, Fleur de Tease, Burgundy Burlesque, Burlesque Ballroom, Bourbon Boylesque, and she has lectured on the history of burlesque at Tulane University and the Louisiana State Museum.

Bruce Spizer will give a multi-media presentation, “The Beatles and Sgt. Pepper (and the Group’s Little Known Jewish Connections).” Spizer is considered one of the world’s leading experts on the Beatles, having written nine critically acclaimed books on the Beatles, including his latest, “The Beatles and Sgt. Pepper: A Fan’s Perspective.” He has appeared on numerous local, national and international television and radio programs as a Beatles expert and serves as a consultant to Capitol Records and Apple Corps, Ltd., on Beatles projects.

Cultural ambassador and culinary activist Poppy Tooker will speak on “Keeping Kosher in a Creole and Cajun World.” A native New Orleanian, Tooker hosts the weekly, NPR-affiliated radio show “Louisiana Eats!” She also provides weekly restaurant commentary on the PBS show, “Steppin’ Out,” seen on WYES-TV. She is the author of four cookbooks, including “Tujague’s Restaurant Cookbook — Creole Recipes and Lore in the Grand New Orleans Tradition,” which came out in 2015. Her new book, “The Pascal’s Manale Cookbook,” will be published in the fall of 2018.

Rachel Laufer, a junior at Lusher Charter School and two-term Big Easy BBYO president, will lead “You Jew You,” a discussion based on the idea that there is no right or wrong definition of Judaism, acknowledging the wide range of practice and philosophy.

Ethan Katz and Joanna Moody, 10th-graders at Metairie Park Country Day School, will lead an interactive session, “Taste of Teamwork,” showing what is possible when a team works together.

Dating, Jewish identity, interracial and community interactions, and Jewish involvement in the labor movement are among the sessions aimed at young Jews.

Tulane alumna Sophie Unterman will address “In Search of the Male Shiksa: One Millennial Jew’s Tale of Interfaith and Interracial Dating,” based on her essay that won a national award from the American Jewish Press Association. Unterman teaches English in the New Orleans public school system.

Dana Keren, senior administrator for Tulane University School of Medicine’s Department of Obstetrics and Gynecology, will present a session on “From ‘Jew vs. Jew’ to ‘Me and You’: Working Toward Pluralism.” She is an alumna of Avodah, and co-founded Birthmark Doula Collective, a reproductive justice cooperative that provides pregnancy and parenting support services to New Orleans families.

Another Avodah alumna who remained in New Orleans is Alysse Fuchs, who us now Avodah’s program director. She will present “The Triangle Shirtwaist Factory through Today: Jews and the Labor Movement.”

The full schedule and registration are available here.