Another way to serve: After 20 years in Navy, Elaine Luria running for Congress 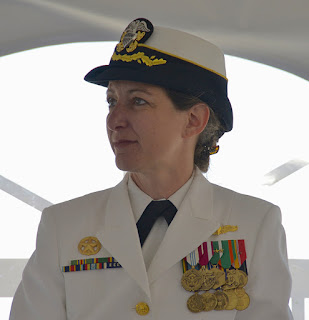 Recently, the register at Stein’s Deli in New Orleans has been sporting an Elaine Luria for Congress sticker.

Luria, a Birmingham native who also has family in New Orleans, including cousin Dan Stein, isn’t running for Congress in Alabama or Louisiana — she’s running in Virginia’s 2nd district, centering on Virginia Beach and part of Norfolk. But as part of a wave of women running for office in 2018, the 20-year Navy veteran has been receiving a lot of attention, from the New York Times to national Jewish media outlets.

Last April, Luria was being honored at a Change of Command and retirement ceremony, as she stepped down as commander of Assault Craft Unit TWO and settled into life as a business owner along the Virginia coast. In January, she announced her candidacy for Congress in the Democrat primary.

She grew up in Birmingham in a family that has been active in the community for generations. Her mother, Michelle Luria, and grandmother were active in National Council of Jewish Women, Hadassah and the Temple Emanu-El Sisterhood, and the Birmingham Jewish Federation. Her mother served as NCJW president. Now, Luria is active in Ohef Sholom in Norfolk.

When Luria took the PSAT at Indian Springs School, there was a place to check off for information about the military, and she received a brochure about the U.S. Naval Academy Summer Science and Engineering Seminar for rising juniors. “Prior to that, I thought the only school I wanted to go to was Columbia in New York City,” she said. It had been a while since a Springs graduate had entered one of the military academies, she noted.

Both of her grandfathers had served in the Navy, and “my father had always talked about wanting to go to West Point.”

After the summer seminar, her only college application was to the Naval Academy. She took the oath at age 17, and graduated in 1997 with a degree in physics and history, and a minor in French. She knew that she wanted to serve on ships, and with a technical degree, she was eligible for the nuclear program.

After being commissioned, she served aboard the USS O’Brien, based in Yokosuka, Japan. When she entered the academy, women were not allowed to serve on combat ships, but that ban was lifted in 1995, and she became one of the first women able to serve her entire career on a ship. She got “my first choice” with the O’Brien, a forward deployed destroyer that was sent to the Middle East. She was in charge of Tomahawk strike missiles, managing a division of 15 people.

She spent most of her first tour deployed in that region, enforcing Iraqi oil sanctions. “We would basically chase smugglers” in smaller ships that would offload to larger ships.

She returned to the U.S. and began a one-year nuclear power training program, learning how to run every aspect so that she could become a supervisor. She became Reactor Controls Division Officer on the USS Harry Truman, once again deploying to the Middle East.

Luria then became Flag Aide to the commander of the U.S. Seventh Fleet, overseeing the commander’s travel schedule and coordinating international engagement, traveling to India, China, Russia, Vietnam, Korea, Malaysia, Singapore and Australia. “It was really a great experience, as a young lieutenant sitting beside a three-star admiral,” she said.

She continued her sea deployments with the USS Mason and USS Enterprise, finishing as executive officer of the guided missile cruiser USS Anzio.

She became maintenance coordinator of the Atlantic Fleet, overseeing the USS Dwight D. Eisenhower, then reported to Assault Craft Unit TWO as executive officer, assuming command in 2016. Under her command, the unit deployed to operations in Honduras, Panama and Norway, and humanitarian and disaster relief operations following Hurricanes Joaquin and Matthew.

While at the Naval Academy, she was active in the Jewish Midshipman Club. A requirement to attend Sunday chapel services no longer exists, but the Jewish chaplains would hold services, where bagels were a major attraction.

The academy also set up sponsor families in the Annapolis community. “They try to match people by faith or other demographics,” she said, and she was paired with a Jewish family that was “very active in the community.”

She said the number of Jewish service members in the Navy is “quite small.” While there are some Jewish chaplains, simply because of the numbers “it’s very unlikely you’ll be stationed somewhere there is a Jewish chaplain.”

To do Jewish in the service, you usually have to figure it out yourself. “I’ve always volunteered as a lay leader in the absence of a Jewish chaplain and made sure the Jewish sailors could have a Passover Seder,” she said.

They used the military version of the Jewish prayer book and sometimes received care packages with matzah, gefilte fish and other Passover staples.

One Passover in particular, she identified about a dozen people on the USS Enterprise, not all of them Jewish, who were interested in a Seder. “We did a Seder in the ship’s library, which is right under the flight deck.” Over their heads, they could hear and feel the jets take off and land, flying sorties into Iraq.

Since 2000, Norfolk has been home for Luria and her husband, Commander Robert Blondin, who retired from the Navy after 27 years of service. They were married in 2005.

In 2013, the Mermaid Factory was born. They were looking for a miniature of the mermaid statues that have dotted the Norfolk area since 1999, to give to an out-of-town visitor as a gift, but couldn’t find any. “Robert said let’s get a block of clay and make it.”

The Mermaid Factory has blank mermaids and dolphins that visitors can paint and decorate.

They took their idea to the city, which granted them a license agreement with the stipulation that part of the cost of each mermaid is donated to groups that support youth and the arts.

“Ten weeks from buying a block of clay, we opened the doors” on the first retail location. A second location in Virginia Beach followed in 2015, and thus far over 50,000 mermaids and dolphins have been painted, and they “created 10 jobs in the community.”

As Luria got more involved in the local business community, she became interested in the University of Virginia Sorensen Institute Political Leaders Program, which she completed last year. The small group travels the state, including visits to a coal mine and a prison, and discussions with policy experts, exploring economic and political issues in a bipartisan way. “There’s a lot of common ground,” Luria said. “We just disagree on how to get there.”

Luria said a naval career isn’t “in and of itself,” there is a “responsibility to continue to serve after the Navy.” Nearing retirement, she followed politics more closely, reached out to a lot of people, including current House members, and “decided this was a good time to run.”

In running, she refers to her core values as “security, equality and prosperity.” She notes that a trained workforce is essential, as thousands of tech jobs are unfilled because of a lack of people to fill them. Also, 40 percent of the district’s jobs are directly or indirectly tied to the military, so “diversifying the economy is very important.”

She said the Affordable Care Act is not a perfect solution for health care, but questions efforts to repeal it “without any suitable substitute,” saying it is creating “turmoil and uncertainty.”

Luria said “there are options we can and should explore that would make the system better and more affordable,” such as allowing people to opt in to Medicare at an earlier age, “reducing the risk in the overall pool.”

The Norfolk area has the world’s largest naval base, along with NASA’s Langley Research Center and Langley Air Force Base, and is the second-largest port on the East Coast. In recent years, flooding has gone from “an occasional nuisance to a frequent and recurring problem,” and action is needed to protect the area.

In 2016, President Donald Trump won her district by 3 points, last year Democrat Ralph Northam won the district by 4 points in the gubernatorial election.

Currently, freshman Republican Scott Taylor serves the district, which Luria said is one of the top “swing district” targets in the 2018 election. Taylor won by a 61 to 39 margin in 2016.

There are currently six declared Democrats in the primary, and Taylor has one primary opponent. Qualifying ends on March 29, the primary election will be on June 12.