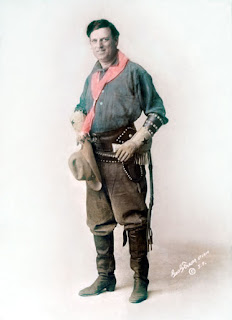 When it comes to early Jewish movie stars, the name Broncho Billy Anderson isn’t usually a name that comes to mind. That is fixin’ to change, with a celebration this month in Arkansas of the first cowboy-western movie star’s life and work.

The event will begin on March 21, what would have been his 138th birthday. In 1880, he was born Gilbert Maxwell Aronson, to Esther and Harry Aronson in Little Rock. When he was 3, the family relocated to Pine Bluff.

At age 18 he moved to New York to be in vaudeville, and in 1903 met Edwin Porter, who cast him in the groundbreaking 12-minute silent film, “The Great Train Robbery.” Enthralled by audience reactions, he decided to stay exclusively in film.

In 1907, he co-founded Essanay Studios, using the name Gilbert Anderson. In 1909, he directed “Mr. Flip,” a film that is credited with the first-ever pie-in-the-face slapstick.

As producer, Anderson is credited with developing the “long shot,” “medium shot,” “close up” and “reestablishment scene” camera techniques.

Anderson was in over 300 short films, but was best known for being the cowboy Broncho Billy, before he retired from acting in 1916 when his business partner wasn’t interested in financing longer productions. Among those acting in short films for Essanay was Charlie Chaplin, who did many of this “Little Tramp” films for the company.

Returning to New York, he produced a series of shorts with Stan Laurel, including “A Lucky Dog,” Laurel’s first work with Oliver Hardy.

The March 21 event will begin at 6:30 p.m. with the dedication of a marker at the site of the house where Anderson was born. The house is no longer there, long since replaced by First United Methodist Church.

The marker will be dedicated in front of the church by Jerry Klinger of the Jewish American Society for Historic Preservation. Klinger’s organization has placed markers at the locations of the first synagogue buildings in numerous states, including in Mobile, Ala.; Jackson, Miss., Pensacola, Fla., and New Orleans. He also dedicated a marker recalling the Concordia Association in 19th-century Little Rock.

At 7 p.m., there will be a reception, talk and screening of short films at the Historic Arkansas Museum in Little Rock. David and Rena Kiehn, world authorities on silent cinema as founders of the Niles Essanay Silent Film Museum in California, will speak. The event is free, but reservations are required. The reception will feature “Jewish foods from Anderson’s childhood.”

The Jewish Federation of Arkansas is a co-sponsor for the events.

On March 22, the Arts and Science Center for Southeast Arkansas in Pine Bluff will host an event starting at 6:30 p.m., with a presentation by David Kiehn. Starting at 7 p.m., there will be screenings of “The Great Train Robbery,” “Mr. Flip,” “Broncho Billy and the Claim Jumpers,” “The Tramp” and “The Lucky Dog.” Judy Warner, a music instructor at Arkansas-Pine Bluff, will perform live music during the screenings.

Tickets to the Pine Bluff event are $5.